Презентация - The invention of tradition in colonial Africa 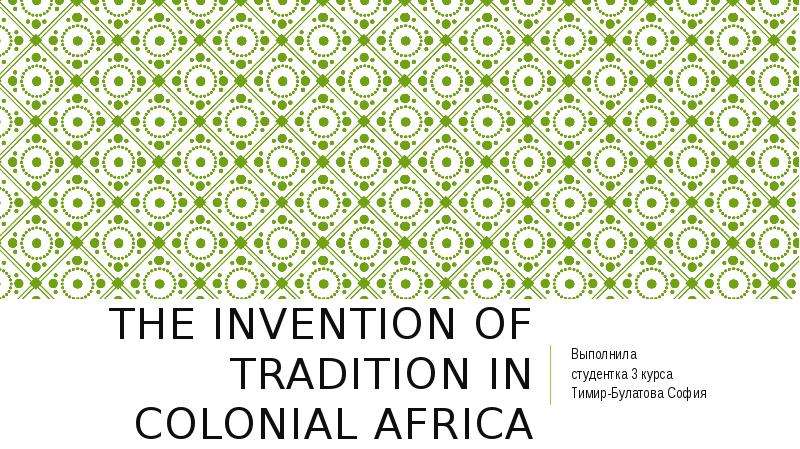 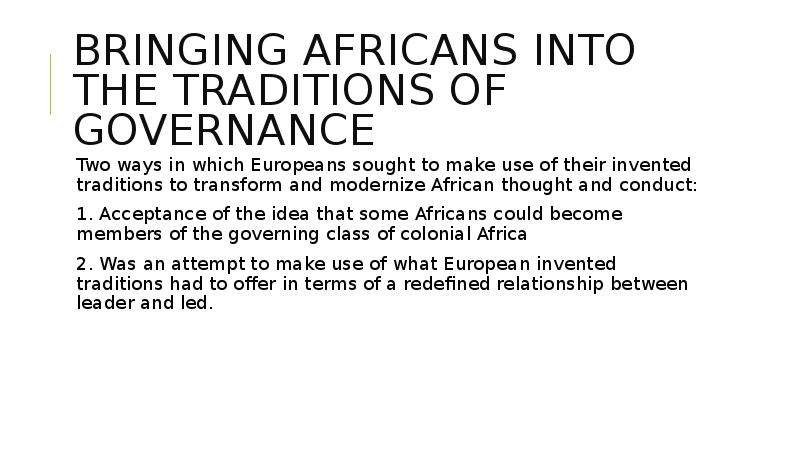 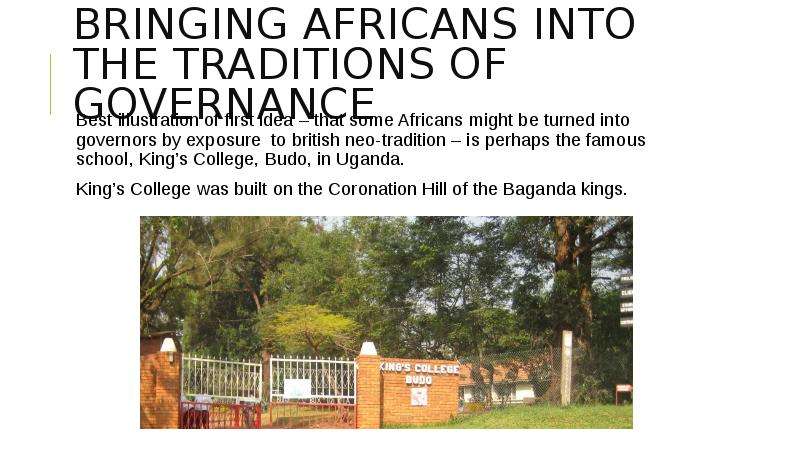 Bringing Africans into the traditions of governance Best illustration of first idea – that some Africans might be turned into governors by exposure to british neo-tradition – is perhaps the famous school, King’s College, Budo, in Uganda. King’s College was built on the Coronation Hill of the Baganda kings.
Pic.4 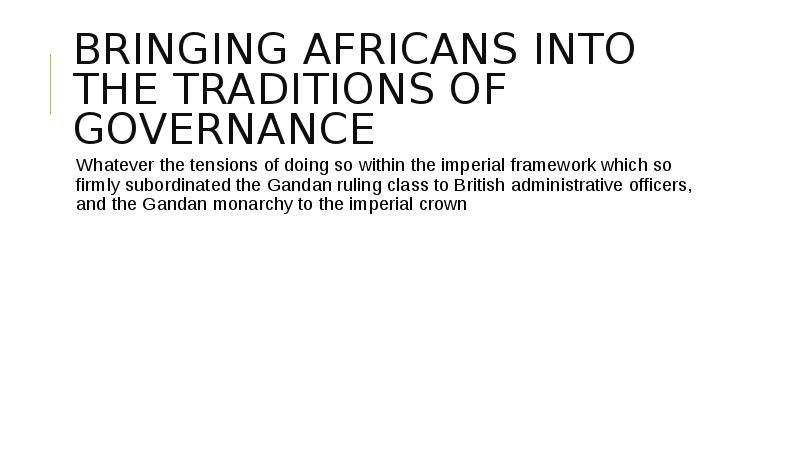 Bringing Africans into the traditions of governance Whatever the tensions of doing so within the imperial framework which so firmly subordinated the Gandan ruling class to British administrative officers, and the Gandan monarchy to the imperial crown
Pic.5 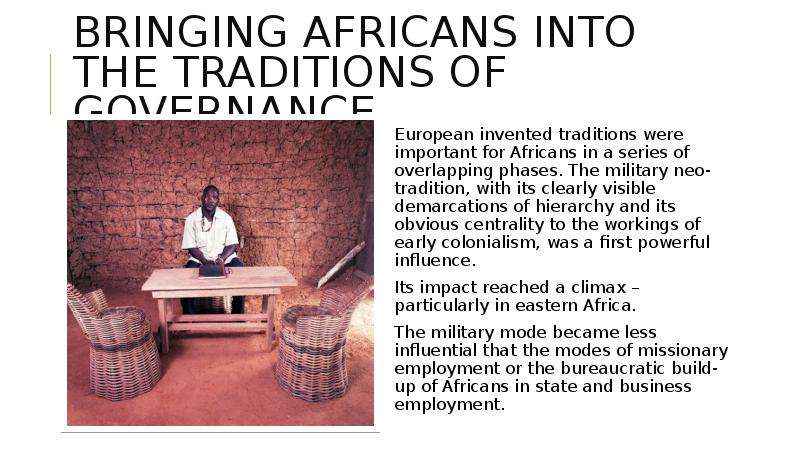 Bringing Africans into the traditions of governance European invented traditions were important for Africans in a series of overlapping phases. The military neo-tradition, with its clearly visible demarcations of hierarchy and its obvious centrality to the workings of early colonialism, was a first powerful influence. Its impact reached a climax – particularly in eastern Africa. The military mode became less influential that the modes of missionary employment or the bureaucratic build-up of Africans in state and business employment.
Pic.6 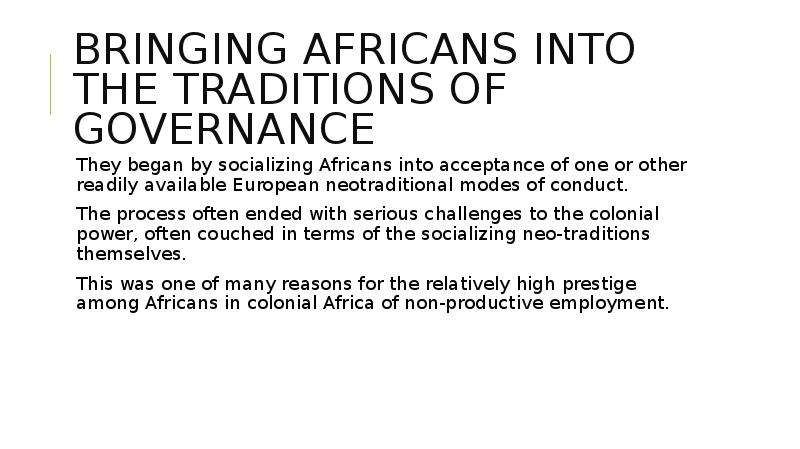 Bringing Africans into the traditions of governance They began by socializing Africans into acceptance of one or other readily available European neotraditional modes of conduct. The process often ended with serious challenges to the colonial power, often couched in terms of the socializing neo-traditions themselves. This was one of many reasons for the relatively high prestige among Africans in colonial Africa of non-productive employment.
Pic.7 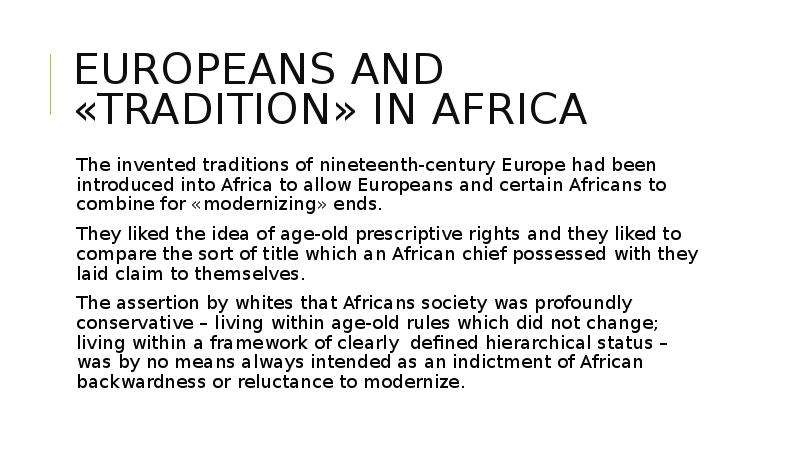 Europeans and «tradition» in Africa The invented traditions of nineteenth-century Europe had been introduced into Africa to allow Europeans and certain Africans to combine for «modernizing» ends. They liked the idea of age-old prescriptive rights and they liked to compare the sort of title which an African chief possessed with they laid claim to themselves. The assertion by whites that Africans society was profoundly conservative – living within age-old rules which did not change; living within a framework of clearly defined hierarchical status – was by no means always intended as an indictment of African backwardness or reluctance to modernize.
Pic.8 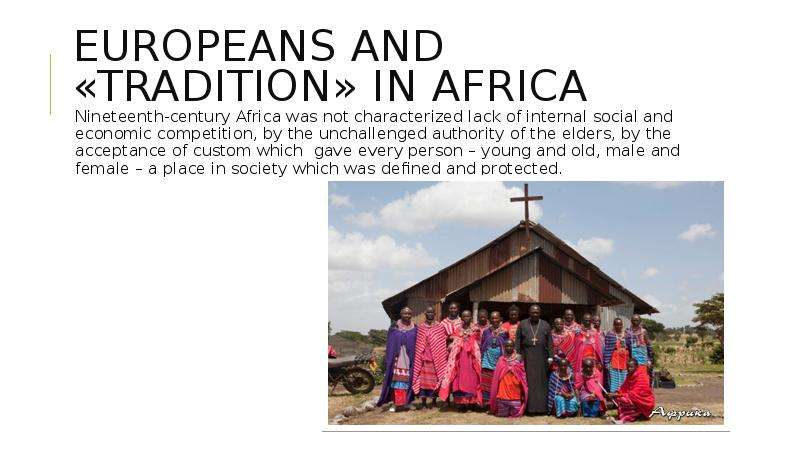 Europeans and «tradition» in Africa Nineteenth-century Africa was not characterized lack of internal social and economic competition, by the unchallenged authority of the elders, by the acceptance of custom which gave every person – young and old, male and female – a place in society which was defined and protected.
Pic.9 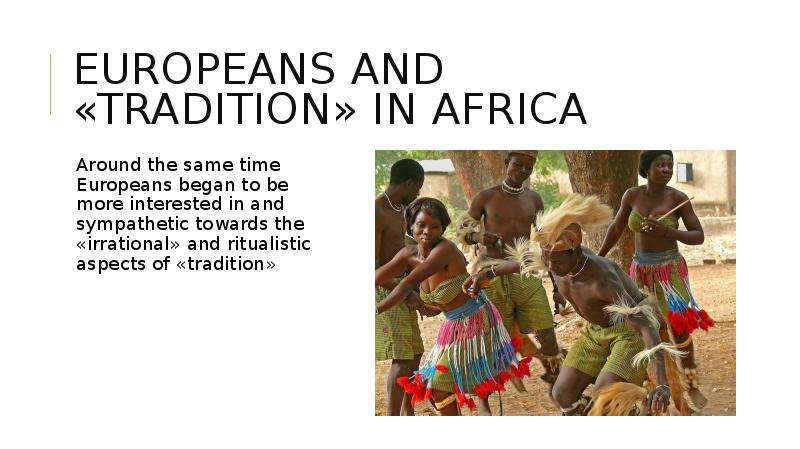 Europeans and «tradition» in Africa Around the same time Europeans began to be more interested in and sympathetic towards the «irrational» and ritualistic aspects of «tradition»
Pic.10 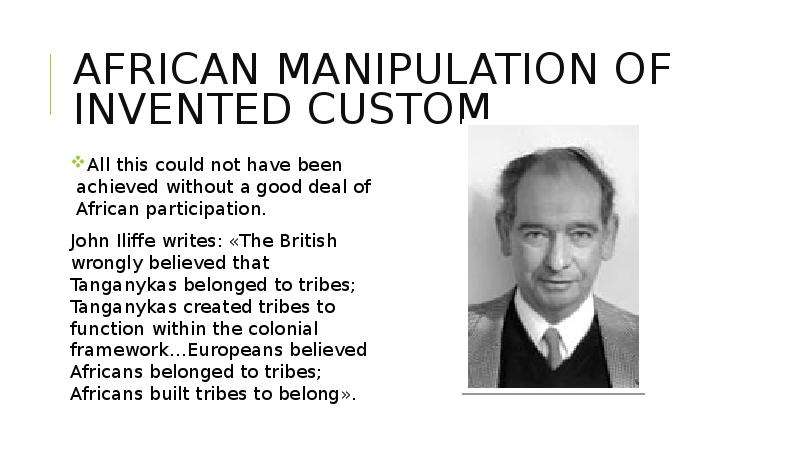 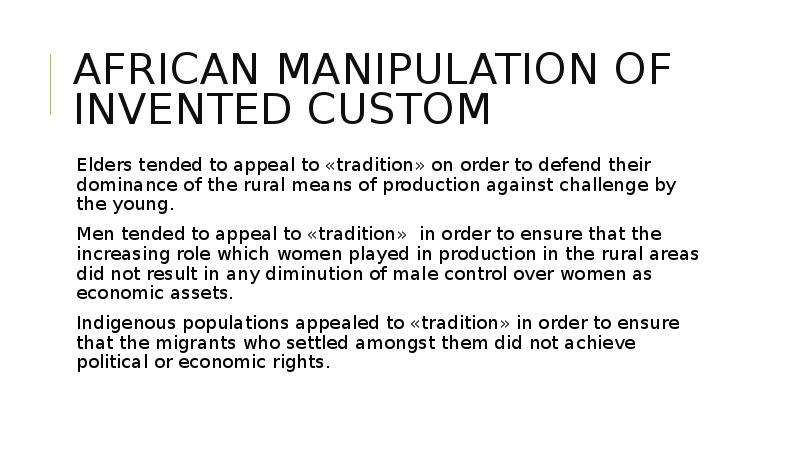 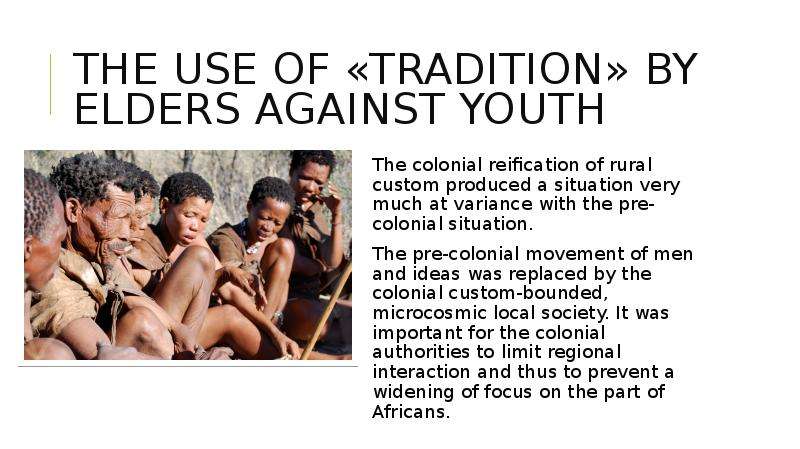 The use of «Tradition» by elders against Youth The colonial reification of rural custom produced a situation very much at variance with the pre-colonial situation. The pre-colonial movement of men and ideas was replaced by the colonial custom-bounded, microcosmic local society. It was important for the colonial authorities to limit regional interaction and thus to prevent a widening of focus on the part of Africans.
Pic.13 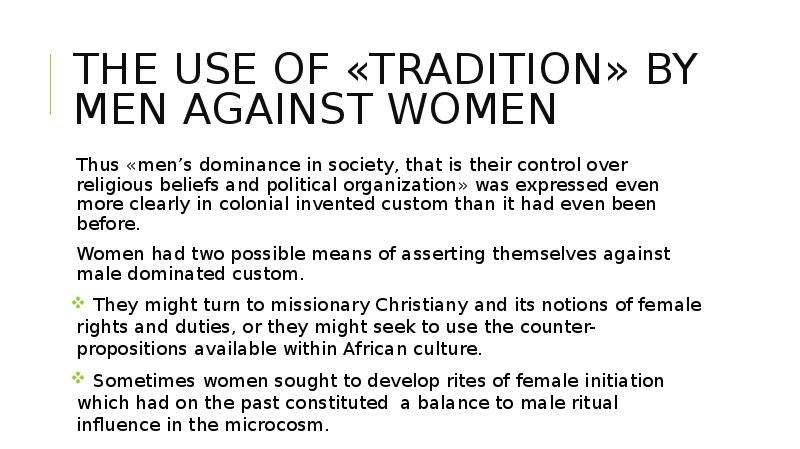 The use of «Tradition» by men against women Thus «men’s dominance in society, that is their control over religious beliefs and political organization» was expressed even more clearly in colonial invented custom than it had even been before. Women had two possible means of asserting themselves against male dominated custom. They might turn to missionary Christiany and its notions of female rights and duties, or they might seek to use the counter-propositions available within African culture. Sometimes women sought to develop rites of female initiation which had on the past constituted a balance to male ritual influence in the microcosm.
Pic.14 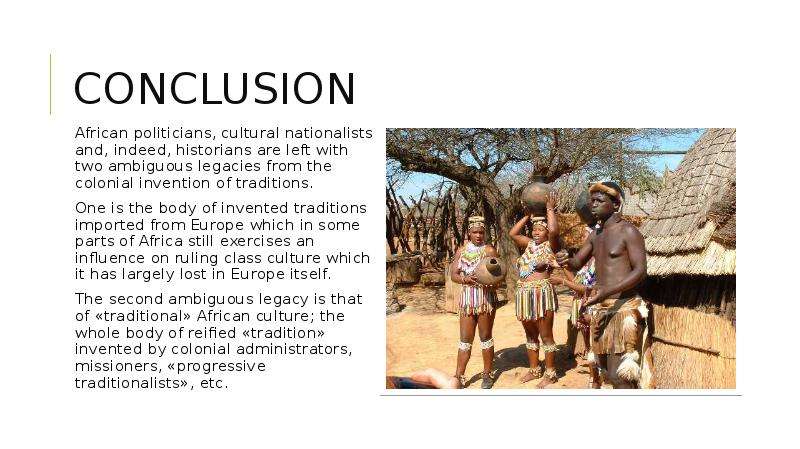 conclusion African politicians, cultural nationalists and, indeed, historians are left with two ambiguous legacies from the colonial invention of traditions. One is the body of invented traditions imported from Europe which in some parts of Africa still exercises an influence on ruling class culture which it has largely lost in Europe itself. The second ambiguous legacy is that of «traditional» African culture; the whole body of reified «tradition» invented by colonial administrators, missioners, «progressive traditionalists», etc.