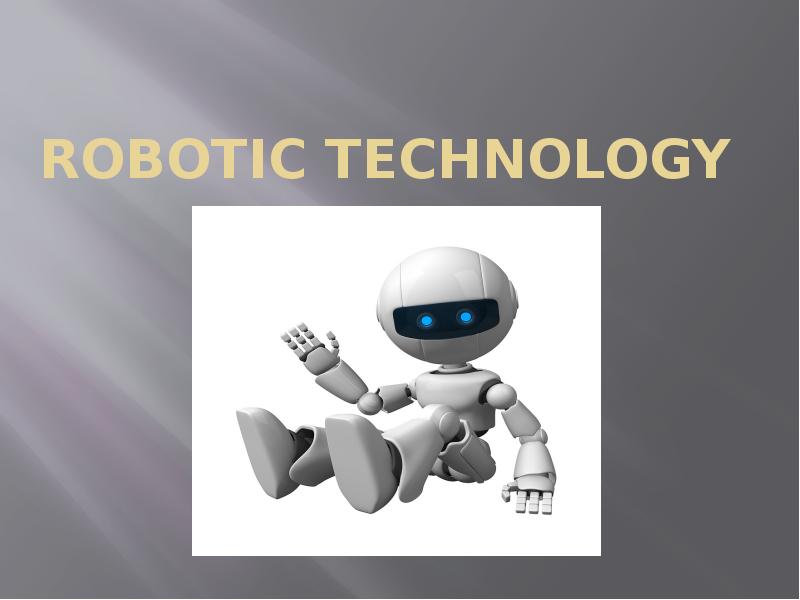 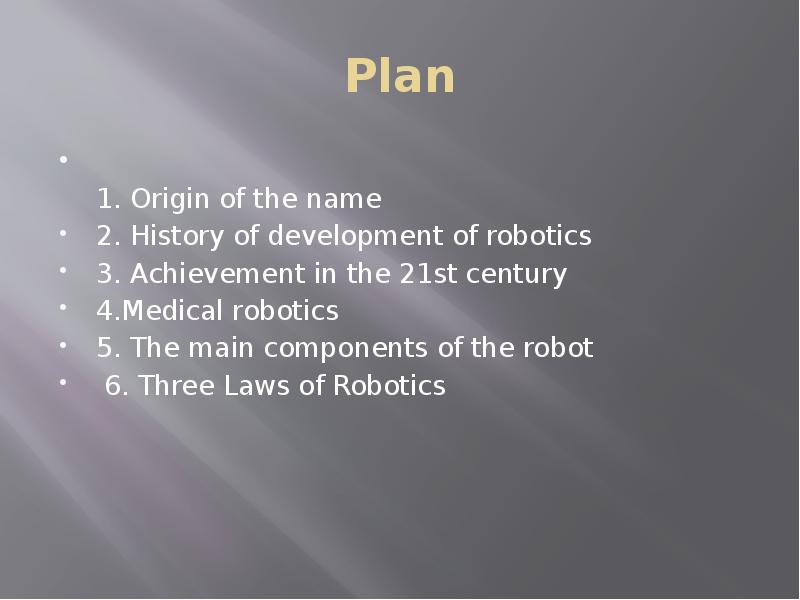 Plan 1. Origin of the name 2. History of development of robotics 3. Achievement in the 21st century 4. Medical robotics 5. The main components of the robot 6. Three Laws of Robotics
Pic.3 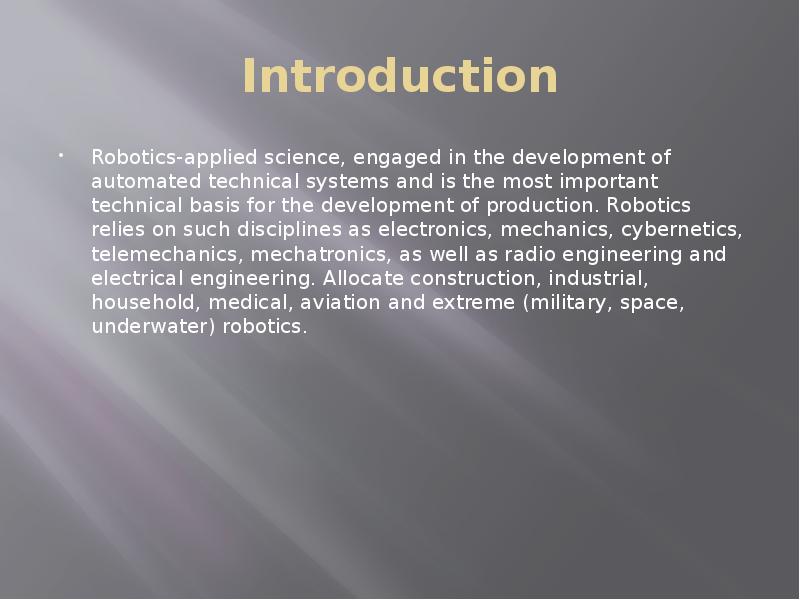 Introduction Robotics-applied science, engaged in the development of automated technical systems and is the most important technical basis for the development of production. Robotics relies on such disciplines as electronics, mechanics, cybernetics, telemechanics, mechatronics, as well as radio engineering and electrical engineering. Allocate construction, industrial, household, medical, aviation and extreme (military, space, underwater) robotics.
Pic.4 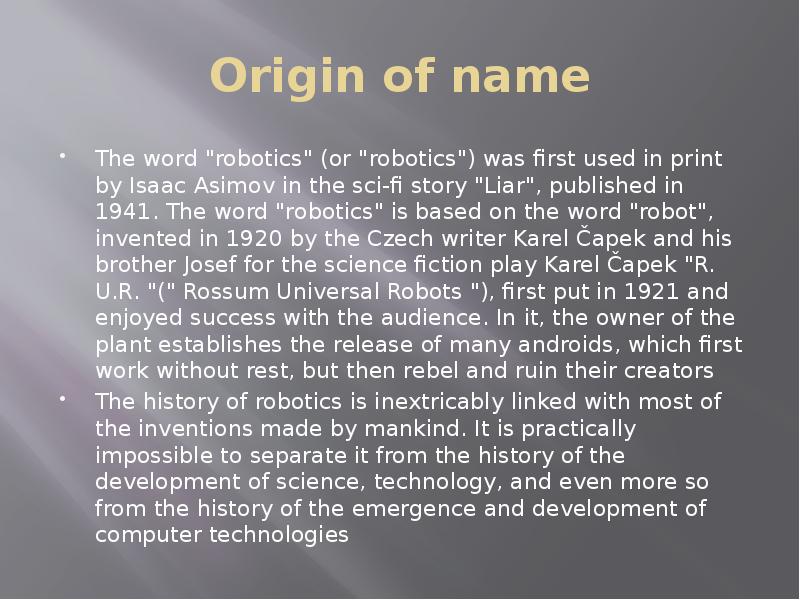 Origin of name The word "robotics" (or "robotics") was first used in print by Isaac Asimov in the sci-fi story "Liar", published in 1941. The word "robotics" is based on the word "robot", invented in 1920 by the Czech writer Karel Čapek and his brother Josef for the science fiction play Karel Čapek "R. U. R. "(" Rossum Universal Robots "), first put in 1921 and enjoyed success with the audience. In it, the owner of the plant establishes the release of many androids, which first work without rest, but then rebel and ruin their creators The history of robotics is inextricably linked with most of the inventions made by mankind. It is practically impossible to separate it from the history of the development of science, technology, and even more so from the history of the emergence and development of computer technologies
Pic.5 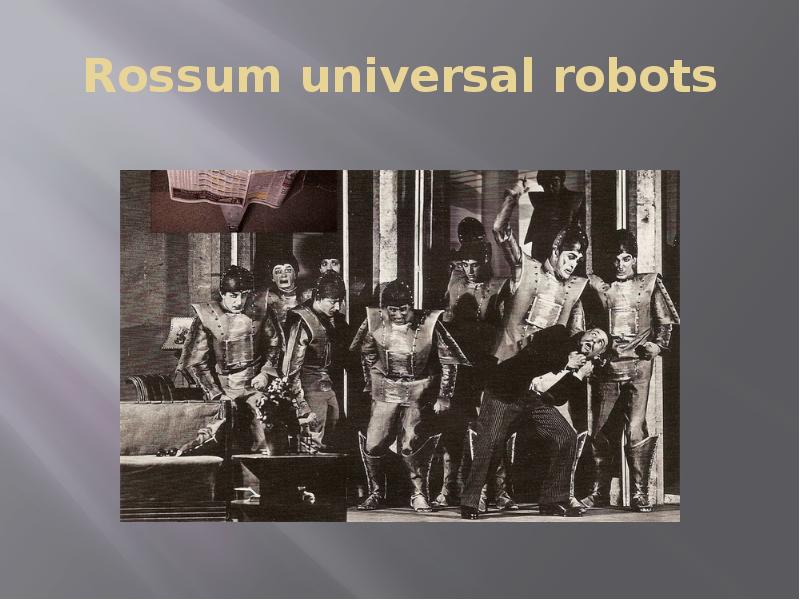 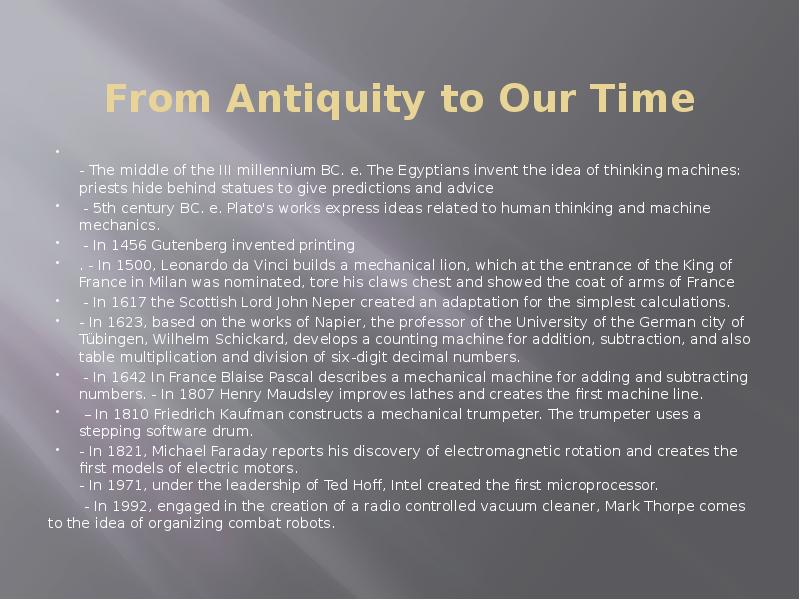 From Antiquity to Our Time - The middle of the III millennium BC. e. The Egyptians invent the idea of ​​thinking machines: priests hide behind statues to give predictions and advice - 5th century BC. e. Plato's works express ideas related to human thinking and machine mechanics. - In 1456 Gutenberg invented printing . - In 1500, Leonardo da Vinci builds a mechanical lion, which at the entrance of the King of France in Milan was nominated, tore his claws chest and showed the coat of arms of France - In 1617 the Scottish Lord John Neper created an adaptation for the simplest calculations. - In 1623, based on the works of Napier, the professor of the University of the German city of Tübingen, Wilhelm Schickard, develops a counting machine for addition, subtraction, and also table multiplication and division of six-digit decimal numbers. - In 1642 In France Blaise Pascal describes a mechanical machine for adding and subtracting numbers. - In 1807 Henry Maudsley improves lathes and creates the first machine line. – In 1810 Friedrich Kaufman constructs a mechanical trumpeter. The trumpeter uses a stepping software drum. - In 1821, Michael Faraday reports his discovery of electromagnetic rotation and creates the first models of electric motors. - In 1971, under the leadership of Ted Hoff, Intel created the first microprocessor. - In 1992, engaged in the creation of a radio controlled vacuum cleaner, Mark Thorpe comes to the idea of ​​organizing combat robots.
Pic.7 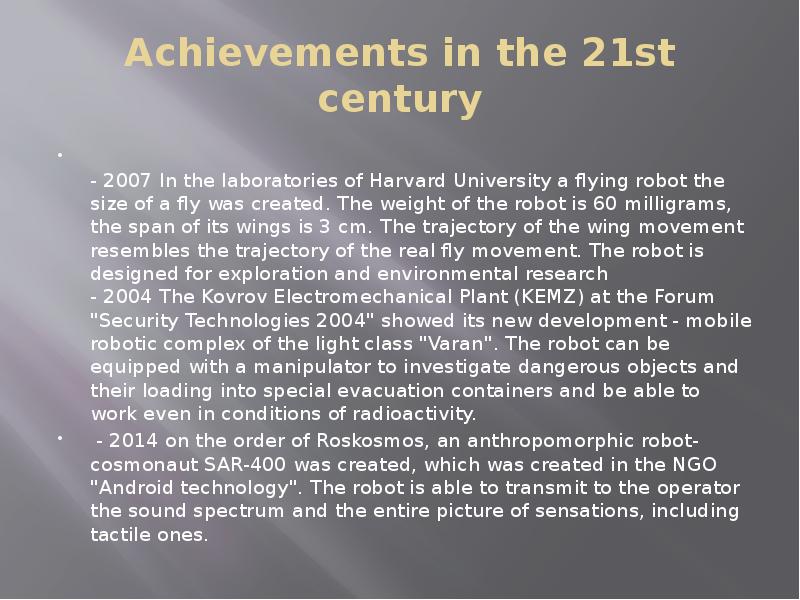 Achievements in the 21st century - 2007 In the laboratories of Harvard University a flying robot the size of a fly was created. The weight of the robot is 60 milligrams, the span of its wings is 3 cm. The trajectory of the wing movement resembles the trajectory of the real fly movement. The robot is designed for exploration and environmental research - 2004 The Kovrov Electromechanical Plant (KEMZ) at the Forum "Security Technologies 2004" showed its new development - mobile robotic complex of the light class "Varan". The robot can be equipped with a manipulator to investigate dangerous objects and their loading into special evacuation containers and be able to work even in conditions of radioactivity. - 2014 on the order of Roskosmos, an anthropomorphic robot-cosmonaut SAR-400 was created, which was created in the NGO "Android technology". The robot is able to transmit to the operator the sound spectrum and the entire picture of sensations, including tactile ones.
Pic.8 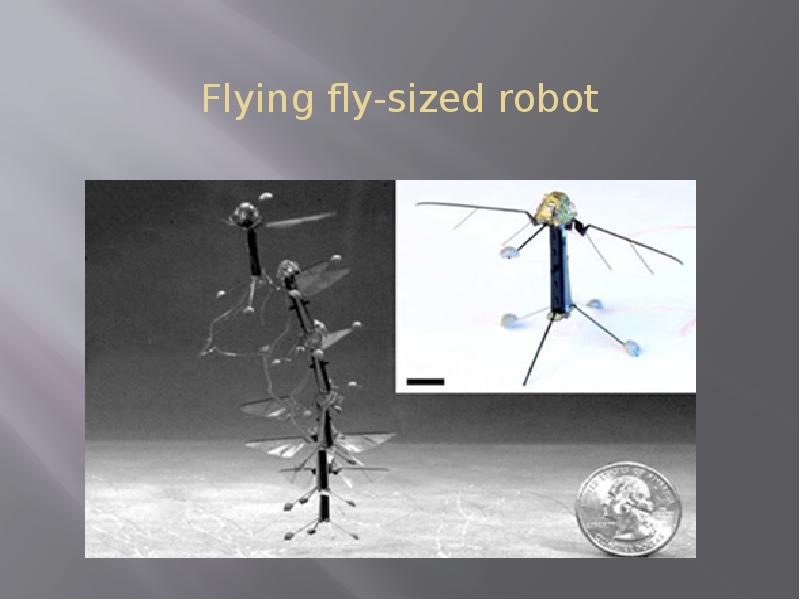 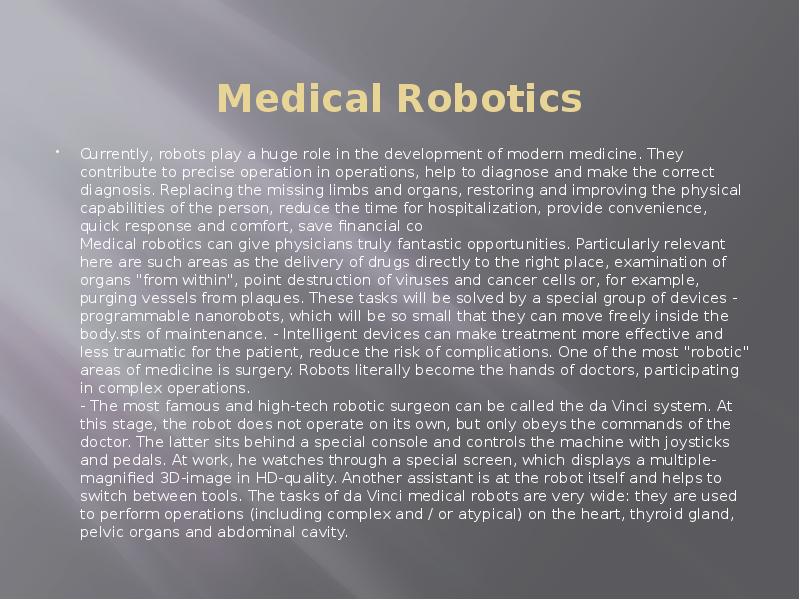 Medical Robotics Currently, robots play a huge role in the development of modern medicine. They contribute to precise operation in operations, help to diagnose and make the correct diagnosis. Replacing the missing limbs and organs, restoring and improving the physical capabilities of the person, reduce the time for hospitalization, provide convenience, quick response and comfort, save financial co Medical robotics can give physicians truly fantastic opportunities. Particularly relevant here are such areas as the delivery of drugs directly to the right place, examination of organs "from within", point destruction of viruses and cancer cells or, for example, purging vessels from plaques. These tasks will be solved by a special group of devices - programmable nanorobots, which will be so small that they can move freely inside the body. sts of maintenance. - Intelligent devices can make treatment more effective and less traumatic for the patient, reduce the risk of complications. One of the most "robotic" areas of medicine is surgery. Robots literally become the hands of doctors, participating in complex operations. - The most famous and high-tech robotic surgeon can be called the da Vinci system. At this stage, the robot does not operate on its own, but only obeys the commands of the doctor. The latter sits behind a special console and controls the machine with joysticks and pedals. At work, he watches through a special screen, which displays a multiple-magnified 3D-image in HD-quality. Another assistant is at the robot itself and helps to switch between tools. The tasks of da Vinci medical robots are very wide: they are used to perform operations (including complex and / or atypical) on the heart, thyroid gland, pelvic organs and abdominal cavity.
Pic.10 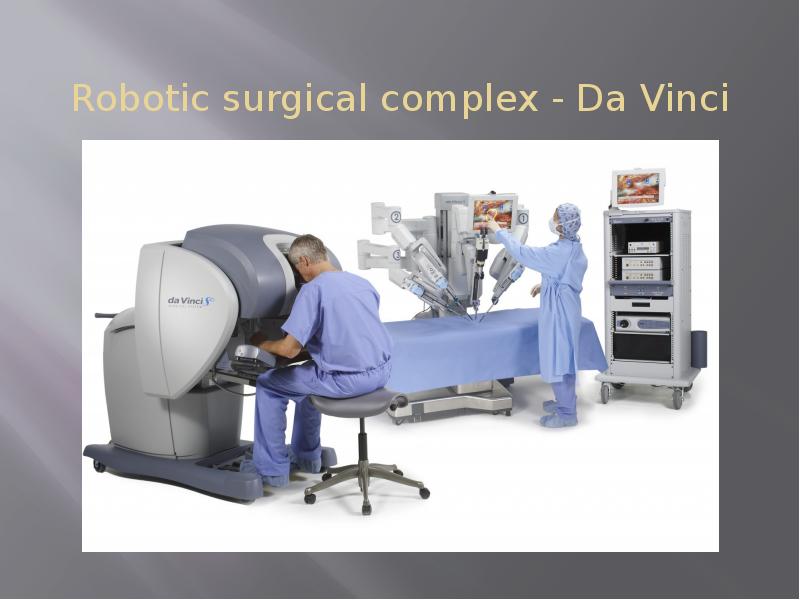 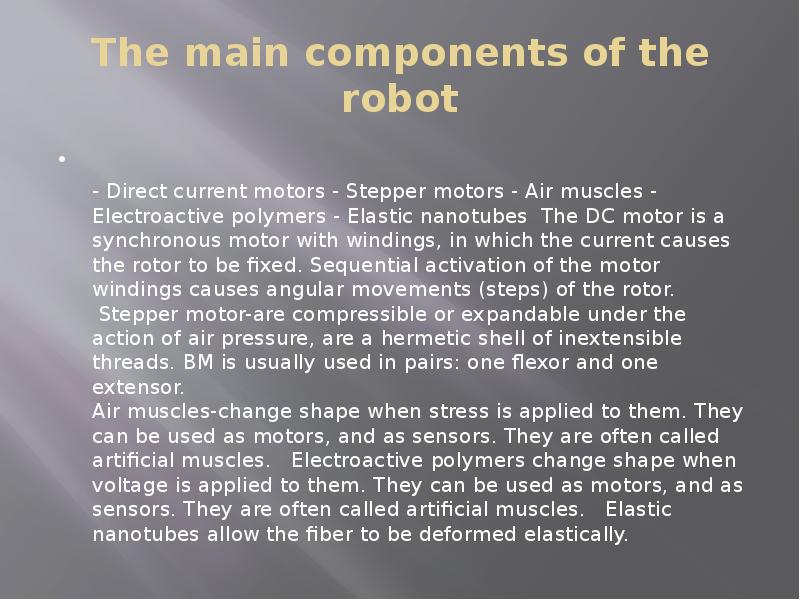 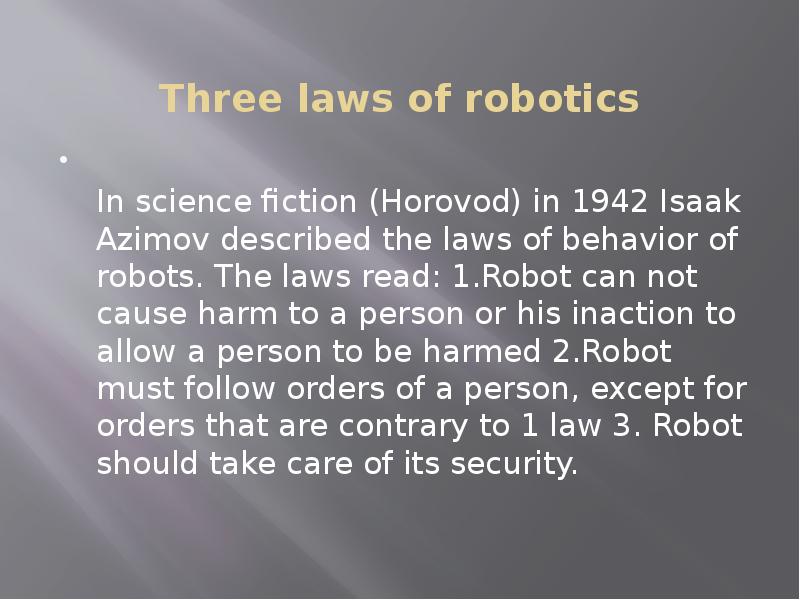 Three laws of robotics In science fiction (Horovod) in 1942 Isaak Azimov described the laws of behavior of robots. The laws read: 1. Robot can not cause harm to a person or his inaction to allow a person to be harmed 2. Robot must follow orders of a person, except for orders that are contrary to 1 law 3. Robot should take care of its security.
Pic.13 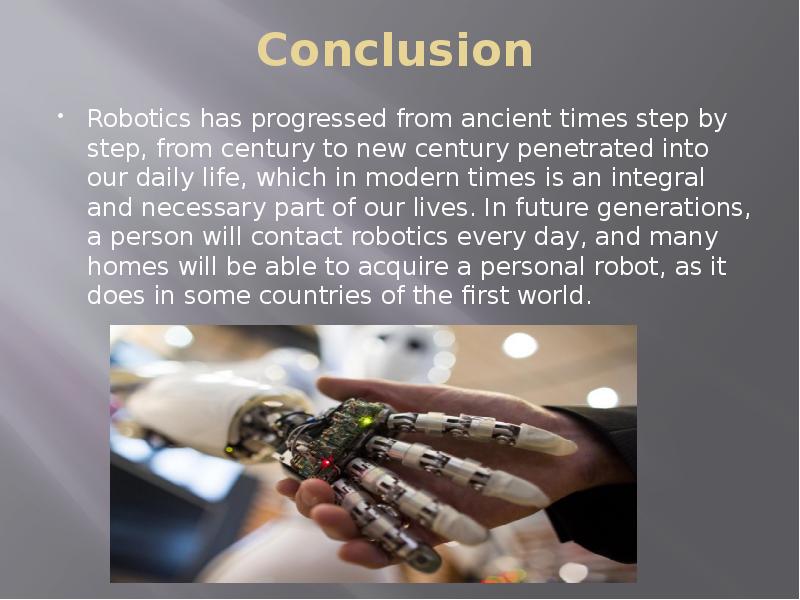 Conclusion Robotics has progressed from ancient times step by step, from century to new century penetrated into our daily life, which in modern times is an integral and necessary part of our lives. In future generations, a person will contact robotics every day, and many homes will be able to acquire a personal robot, as it does in some countries of the first world.