Презентация - How to celebrate Christmas in different countries 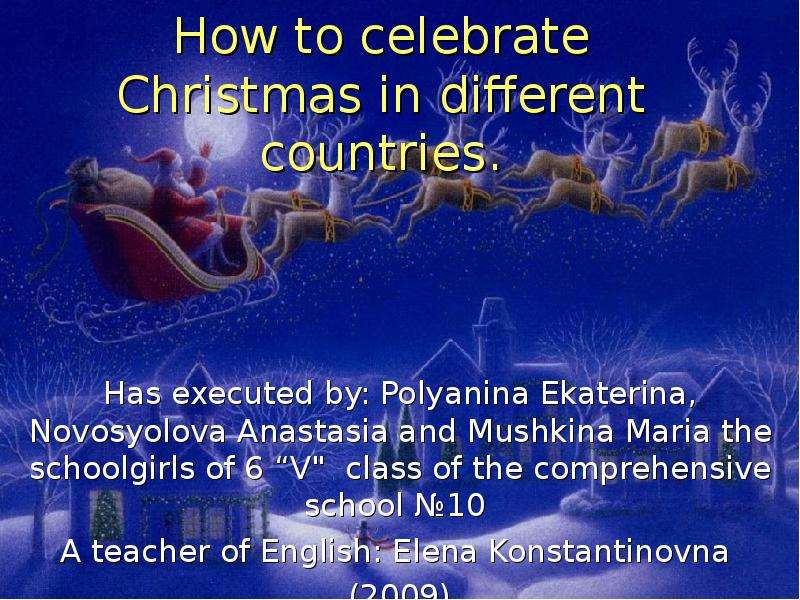 How to celebrate Christmas in different countries. Has executed by: Polyanina Ekaterina, Novosyolova Anastasia and Mushkina Maria the schoolgirls of 6 “V" class of the comprehensive school №10 A teacher of English: Elena Konstantinovna (2009)
Pic.2 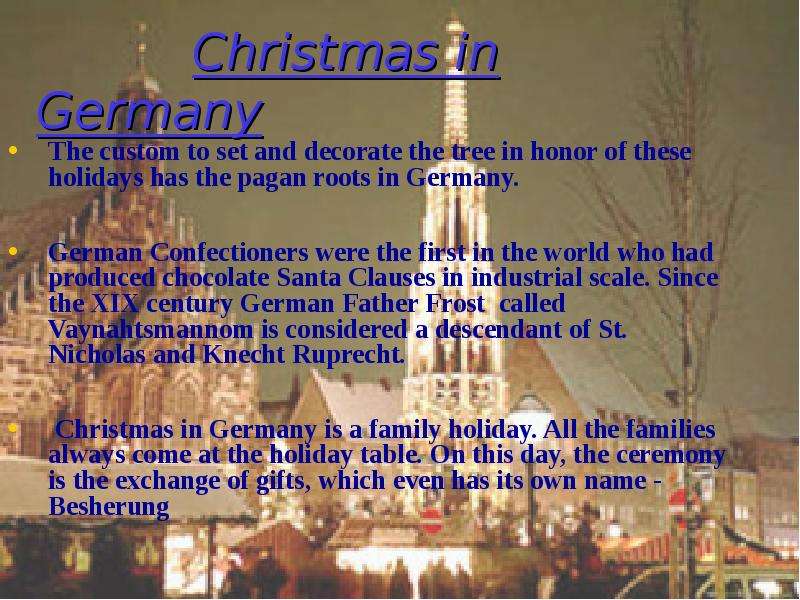 Christmas in Germany The custom to set and decorate the tree in honor of these holidays has the pagan roots in Germany. German Confectioners were the first in the world who had produced chocolate Santa Clauses in industrial scale. Since the XIX century German Father Frost called Vaynahtsmannom is considered a descendant of St. Nicholas and Knecht Ruprecht. Christmas in Germany is a family holiday. All the families always come at the holiday table. On this day, the ceremony is the exchange of gifts, which even has its own name - Besherung
Pic.3 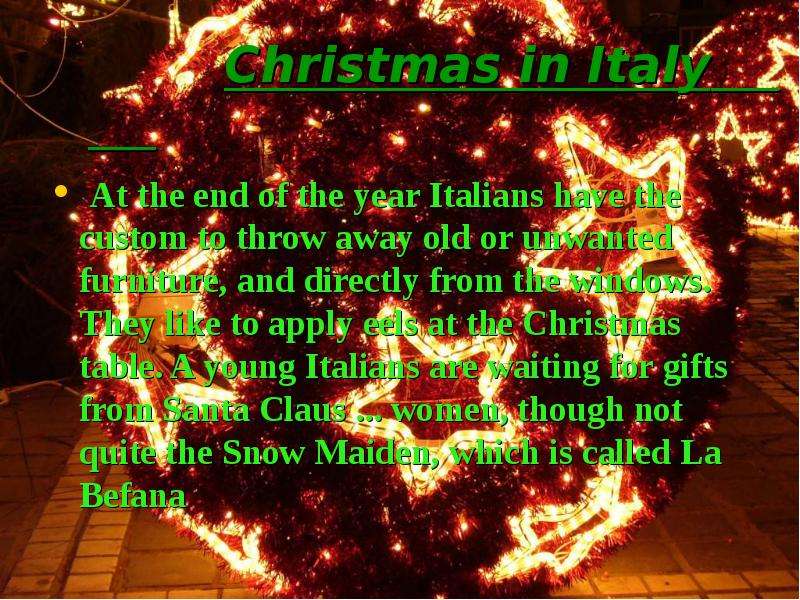 Christmas in Italy At the end of the year Italians have the custom to throw away old or unwanted furniture, and directly from the windows. They like to apply eels at the Christmas table. A young Italians are waiting for gifts from Santa Claus . . . women, though not quite the Snow Maiden, which is called La Befana
Pic.4 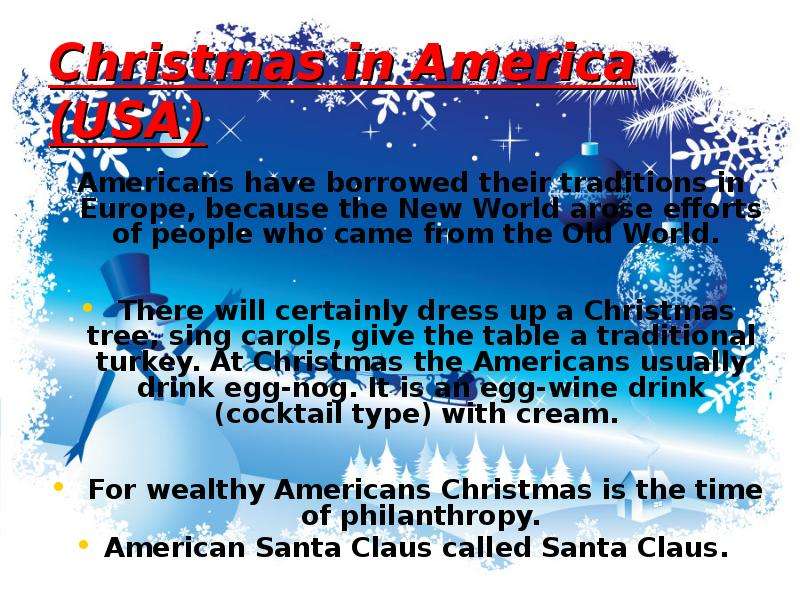 Christmas in America (USA) Americans have borrowed their traditions in Europe, because the New World arose efforts of people who came from the Old World. There will certainly dress up a Christmas tree, sing carols, give the table a traditional turkey. At Christmas the Americans usually drink egg-nog. It is an egg-wine drink (cocktail type) with cream. For wealthy Americans Christmas is the time of philanthropy. American Santa Claus called Santa Claus.
Pic.5 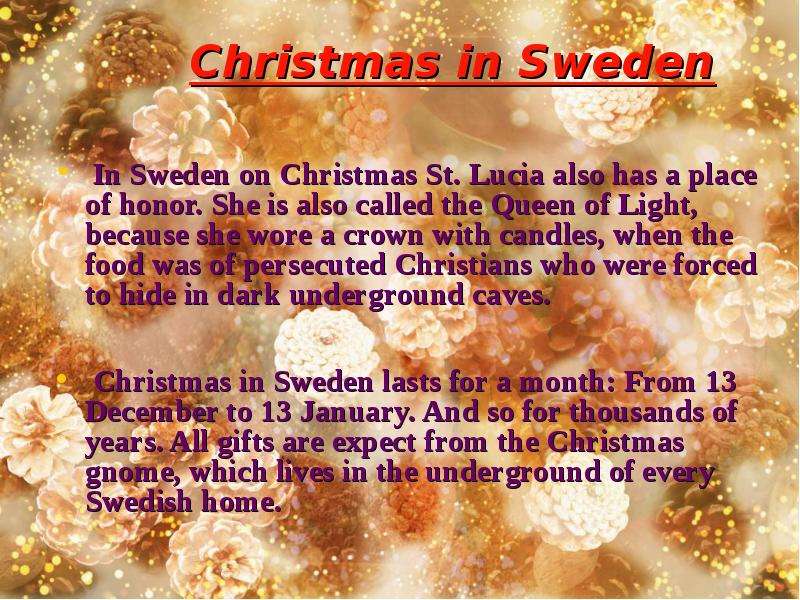 Christmas in Sweden In Sweden on Christmas St. Lucia also has a place of honor. She is also called the Queen of Light, because she wore a crown with candles, when the food was of persecuted Christians who were forced to hide in dark underground caves. Christmas in Sweden lasts for a month: From 13 December to 13 January. And so for thousands of years. All gifts are expect from the Christmas gnome, which lives in the underground of every Swedish home.
Pic.6 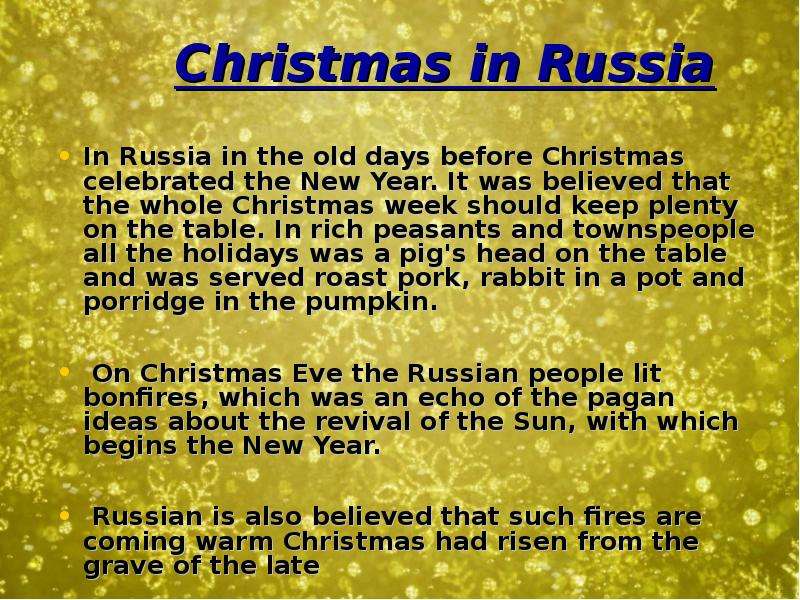 Christmas in Russia In Russia in the old days before Christmas celebrated the New Year. It was believed that the whole Christmas week should keep plenty on the table. In rich peasants and townspeople all the holidays was a pig's head on the table and was served roast pork, rabbit in a pot and porridge in the pumpkin. On Christmas Eve the Russian people lit bonfires, which was an echo of the pagan ideas about the revival of the Sun, with which begins the New Year. Russian is also believed that such fires are coming warm Christmas had risen from the grave of the late