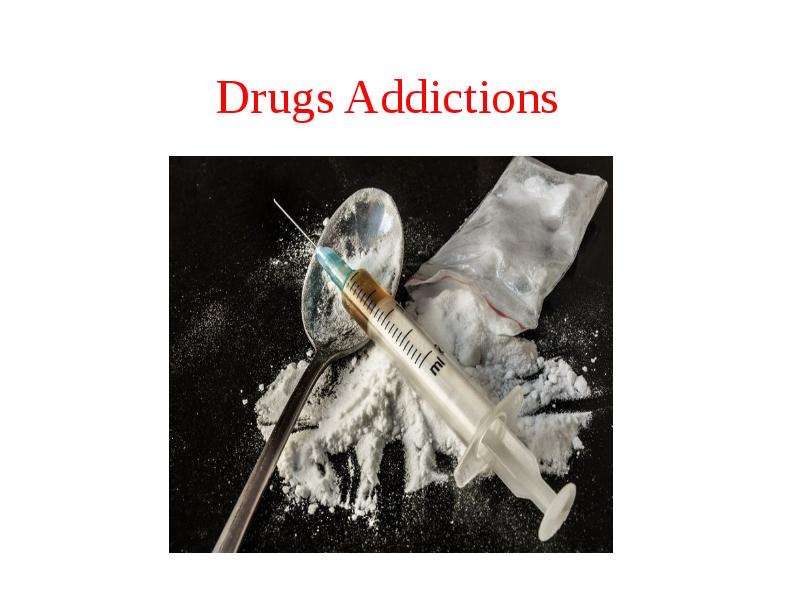 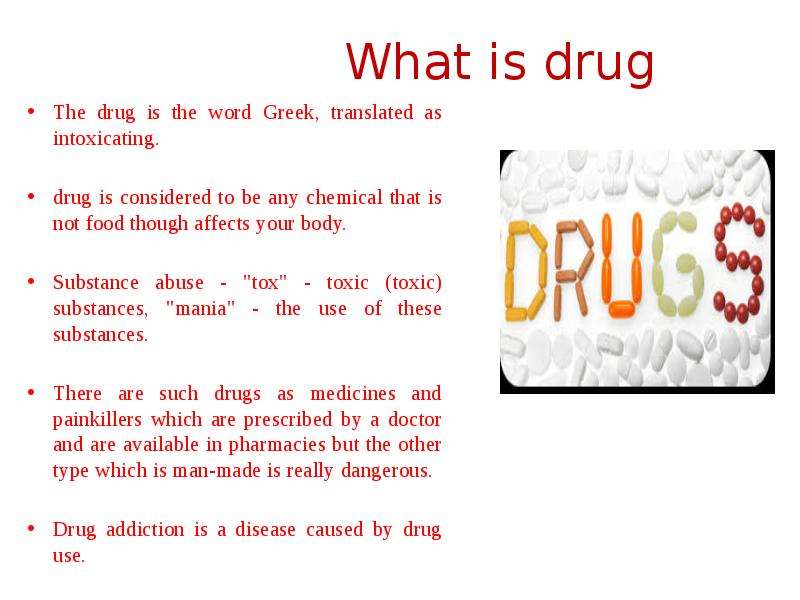 What is drug The drug is the word Greek, translated as intoxicating. drug is considered to be any chemical that is not food though affects your body. Substance abuse - "tox" - toxic (toxic) substances, "mania" - the use of these substances. There are such drugs as medicines and painkillers which are prescribed by a doctor and are available in pharmacies but the other type which is man-made is really dangerous. Drug addiction is a disease caused by drug use.
Pic.3 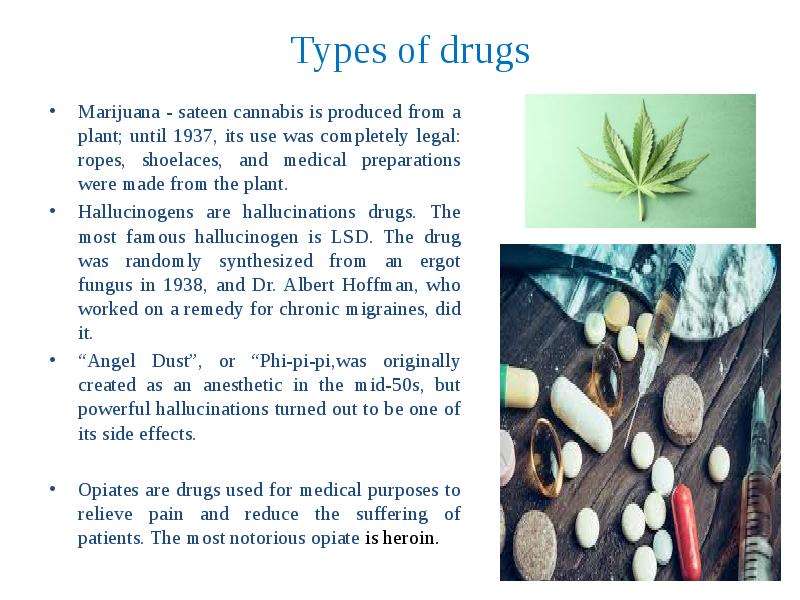 Types of drugs Marijuana - sateen cannabis is produced from a plant; until 1937, its use was completely legal: ropes, shoelaces, and medical preparations were made from the plant. Hallucinogens are hallucinations drugs. The most famous hallucinogen is LSD. The drug was randomly synthesized from an ergot fungus in 1938, and Dr. Albert Hoffman, who worked on a remedy for chronic migraines, did it. “Angel Dust”, or “Phi-pi-pi,was originally created as an anesthetic in the mid-50s, but powerful hallucinations turned out to be one of its side effects. Opiates are drugs used for medical purposes to relieve pain and reduce the suffering of patients. The most notorious opiate is heroin.
Pic.4 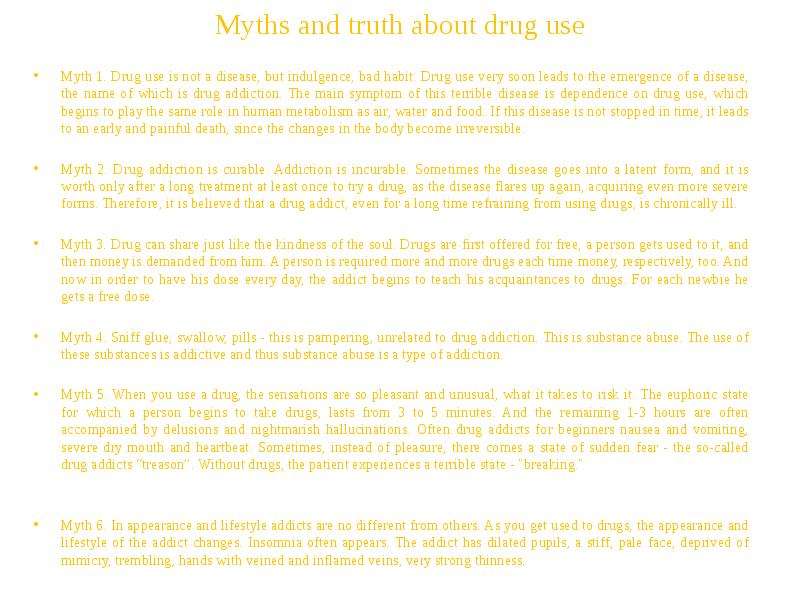 Myths and truth about drug use Myth 1. Drug use is not a disease, but indulgence, bad habit. Drug use very soon leads to the emergence of a disease, the name of which is drug addiction. The main symptom of this terrible disease is dependence on drug use, which begins to play the same role in human metabolism as air, water and food. If this disease is not stopped in time, it leads to an early and painful death, since the changes in the body become irreversible. Myth 2. Drug addiction is curable. Addiction is incurable. Sometimes the disease goes into a latent form, and it is worth only after a long treatment at least once to try a drug, as the disease flares up again, acquiring even more severe forms. Therefore, it is believed that a drug addict, even for a long time refraining from using drugs, is chronically ill. Myth 3. Drug can share just like the kindness of the soul. Drugs are first offered for free, a person gets used to it, and then money is demanded from him. A person is required more and more drugs each time money, respectively, too. And now in order to have his dose every day, the addict begins to teach his acquaintances to drugs. For each newbie he gets a free dose. Myth 4. Sniff glue, swallow, pills - this is pampering, unrelated to drug addiction. This is substance abuse. The use of these substances is addictive and thus substance abuse is a type of addiction. Myth 5. When you use a drug, the sensations are so pleasant and unusual, what it takes to risk it. The euphoric state for which a person begins to take drugs, lasts from 3 to 5 minutes. And the remaining 1-3 hours are often accompanied by delusions and nightmarish hallucinations. Often drug addicts for beginners nausea and vomiting, severe dry mouth and heartbeat. Sometimes, instead of pleasure, there comes a state of sudden fear - the so-called drug addicts “treason”. Without drugs, the patient experiences a terrible state - "breaking. " Myth 6. In appearance and lifestyle addicts are no different from others. As you get used to drugs, the appearance and lifestyle of the addict changes. Insomnia often appears. The addict has dilated pupils, a stiff, pale face, deprived of mimicry, trembling, hands with veined and inflamed veins, very strong thinness.
Pic.5 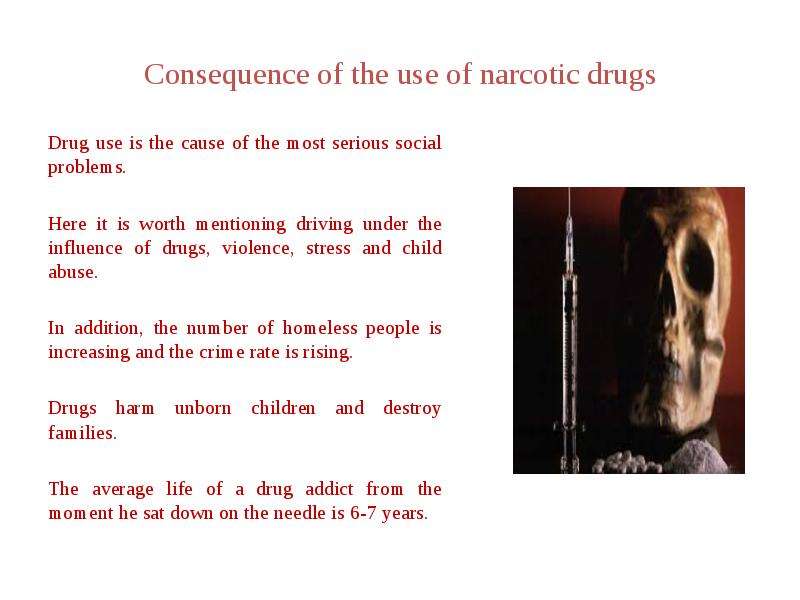 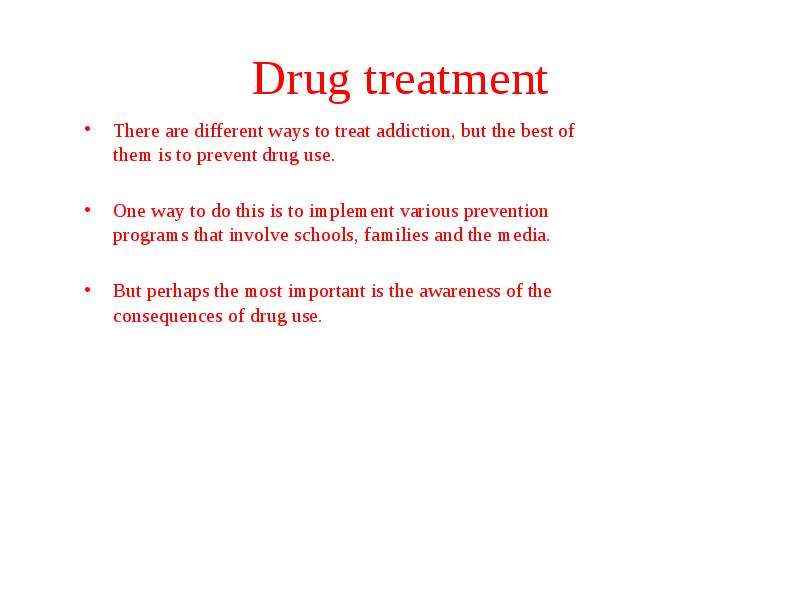 Drug treatment There are different ways to treat addiction, but the best of them is to prevent drug use. One way to do this is to implement various prevention programs that involve schools, families and the media. But perhaps the most important is the awareness of the consequences of drug use.