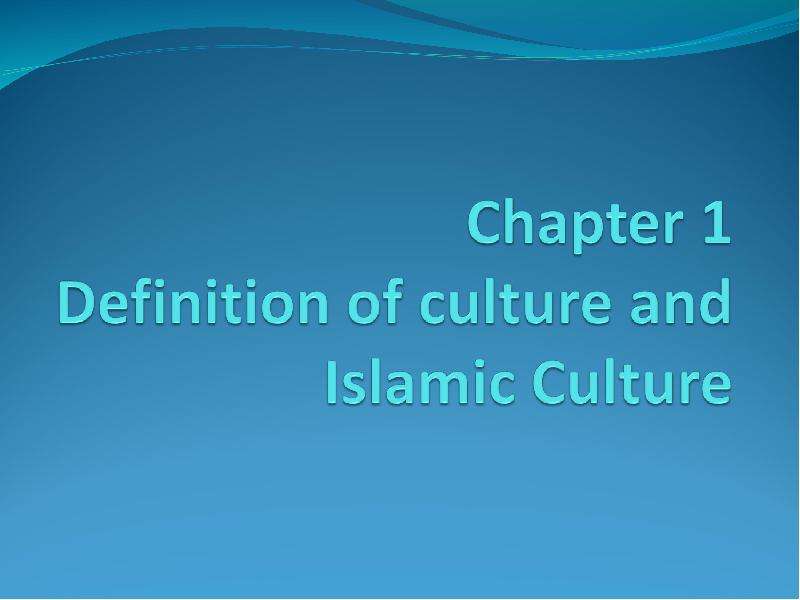 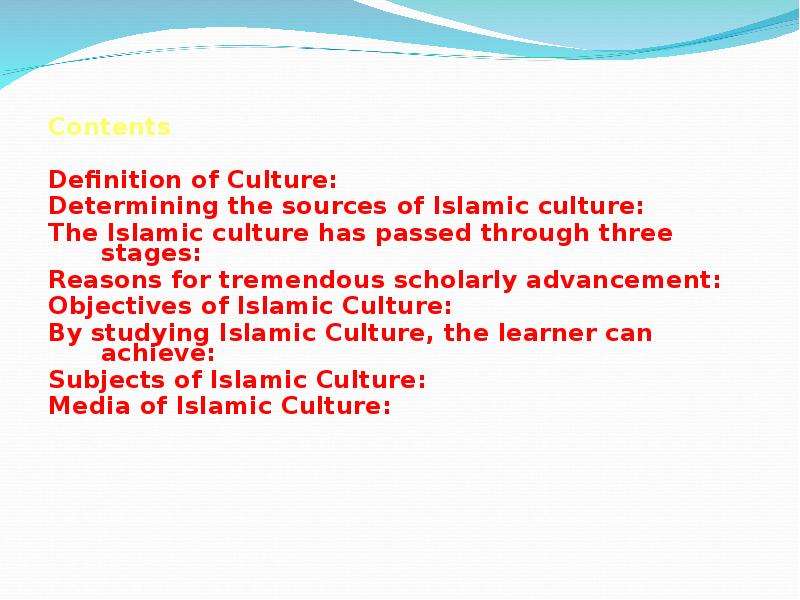 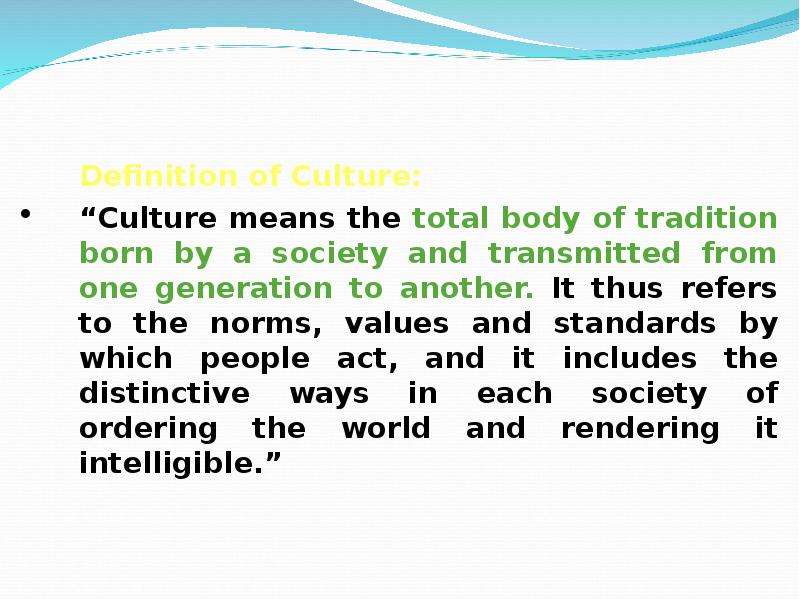 Definition of Culture: Definition of Culture: “Culture means the total body of tradition born by a society and transmitted from one generation to another. It thus refers to the norms, values and standards by which people act, and it includes the distinctive ways in each society of ordering the world and rendering it intelligible. ”
Pic.4 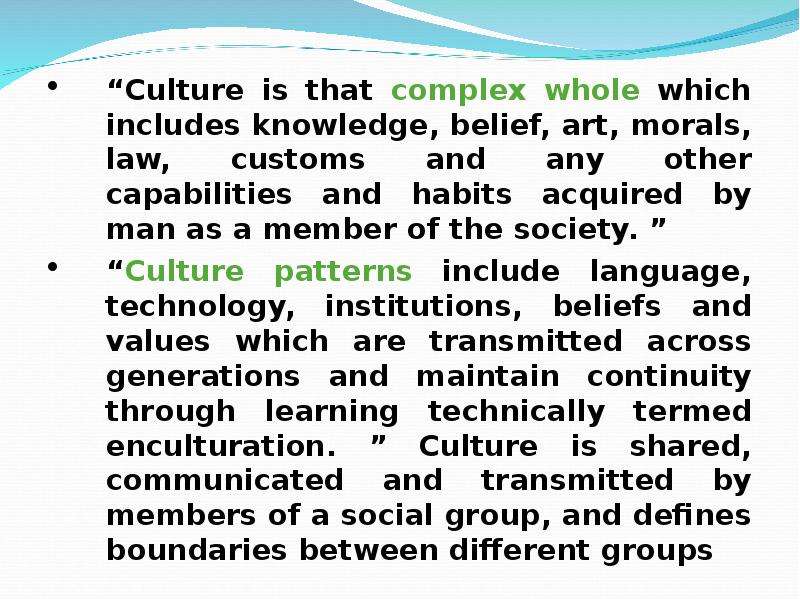 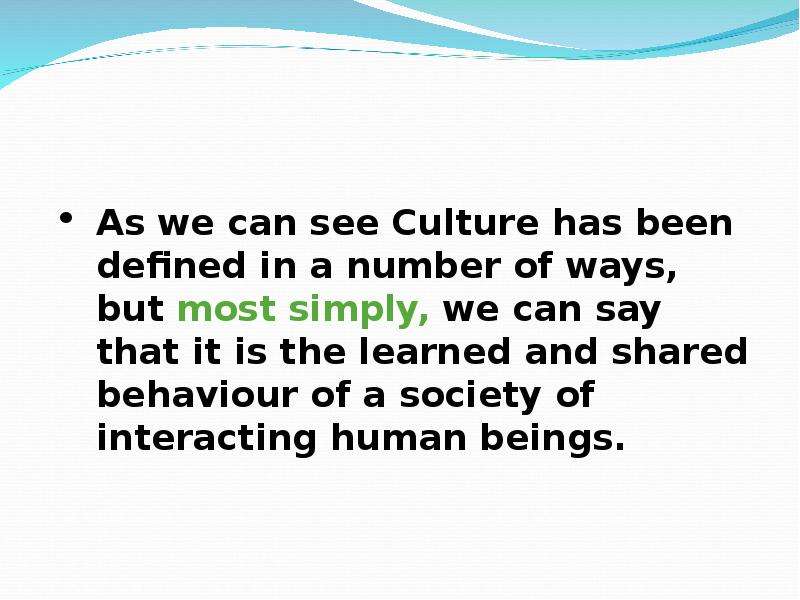 As we can see Culture has been defined in a number of ways, but most simply, we can say that it is the learned and shared behaviour of a society of interacting human beings.
Pic.6 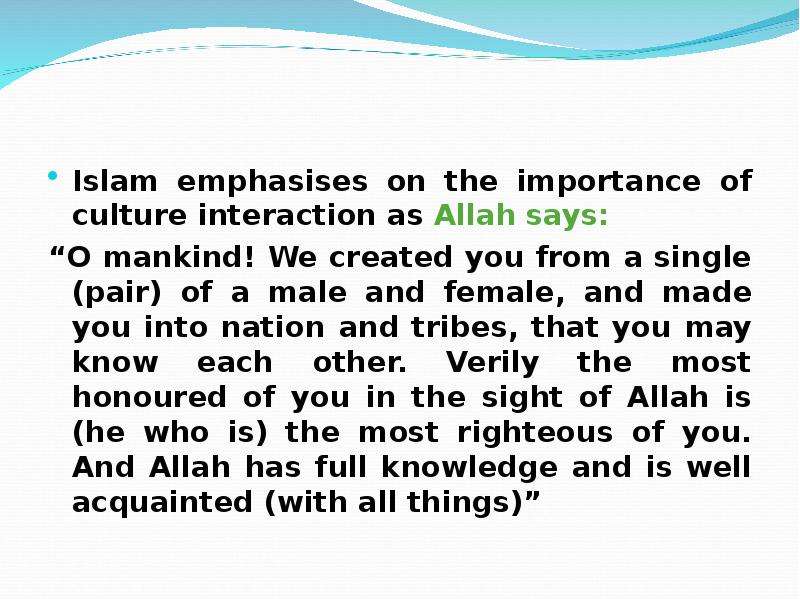 Islam emphasises on the importance of culture interaction as Allah says: “O mankind! We created you from a single (pair) of a male and female, and made you into nation and tribes, that you may know each other. Verily the most honoured of you in the sight of Allah is (he who is) the most righteous of you. And Allah has full knowledge and is well acquainted (with all things)”
Pic.7 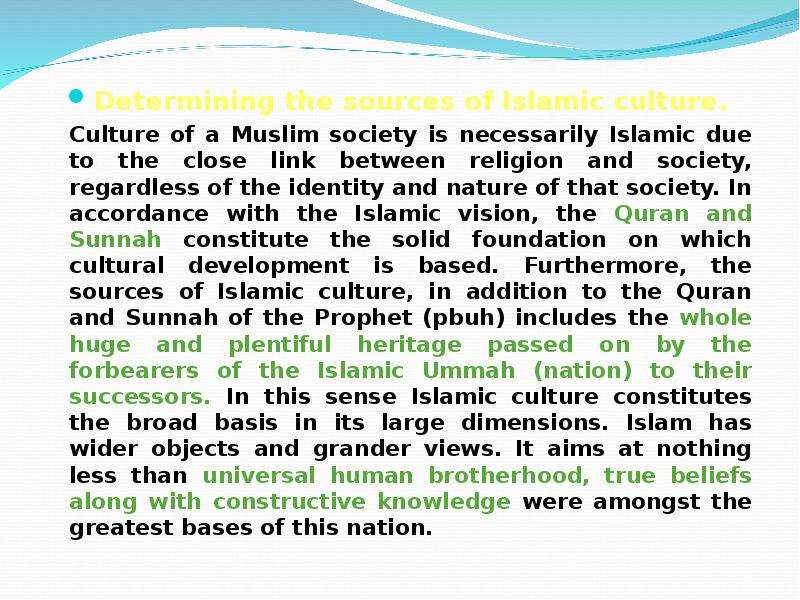 Determining the sources of Islamic culture. Determining the sources of Islamic culture. Culture of a Muslim society is necessarily Islamic due to the close link between religion and society, regardless of the identity and nature of that society. In accordance with the Islamic vision, the Quran and Sunnah constitute the solid foundation on which cultural development is based. Furthermore, the sources of Islamic culture, in addition to the Quran and Sunnah of the Prophet (pbuh) includes the whole huge and plentiful heritage passed on by the forbearers of the Islamic Ummah (nation) to their successors. In this sense Islamic culture constitutes the broad basis in its large dimensions. Islam has wider objects and grander views. It aims at nothing less than universal human brotherhood, true beliefs along with constructive knowledge were amongst the greatest bases of this nation.
Pic.8 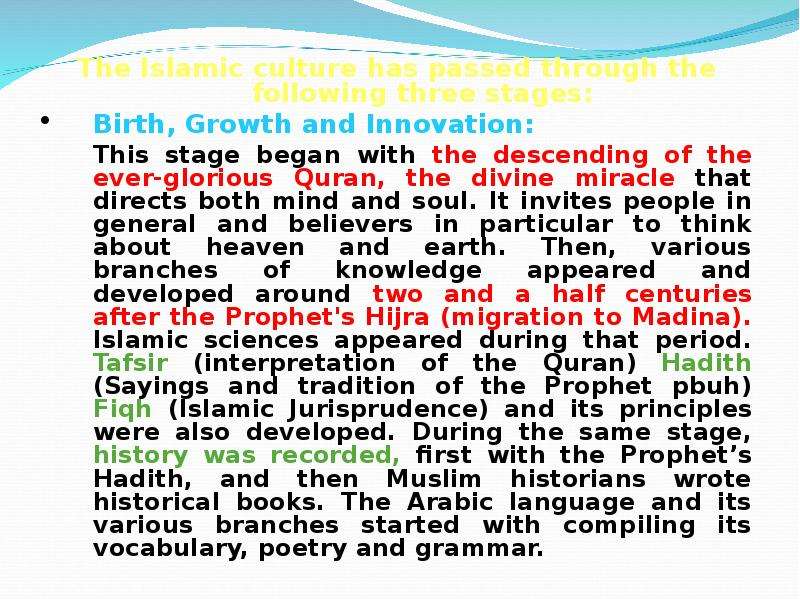 The Islamic culture has passed through the following three stages: The Islamic culture has passed through the following three stages: Birth, Growth and Innovation: This stage began with the descending of the ever-glorious Quran, the divine miracle that directs both mind and soul. It invites people in general and believers in particular to think about heaven and earth. Then, various branches of knowledge appeared and developed around two and a half centuries after the Prophet's Hijra (migration to Madina). Islamic sciences appeared during that period. Tafsir (interpretation of the Quran) Hadith (Sayings and tradition of the Prophet pbuh) Fiqh (Islamic Jurisprudence) and its principles were also developed. During the same stage, history was recorded, first with the Prophet’s Hadith, and then Muslim historians wrote historical books. The Arabic language and its various branches started with compiling its vocabulary, poetry and grammar.
Pic.9 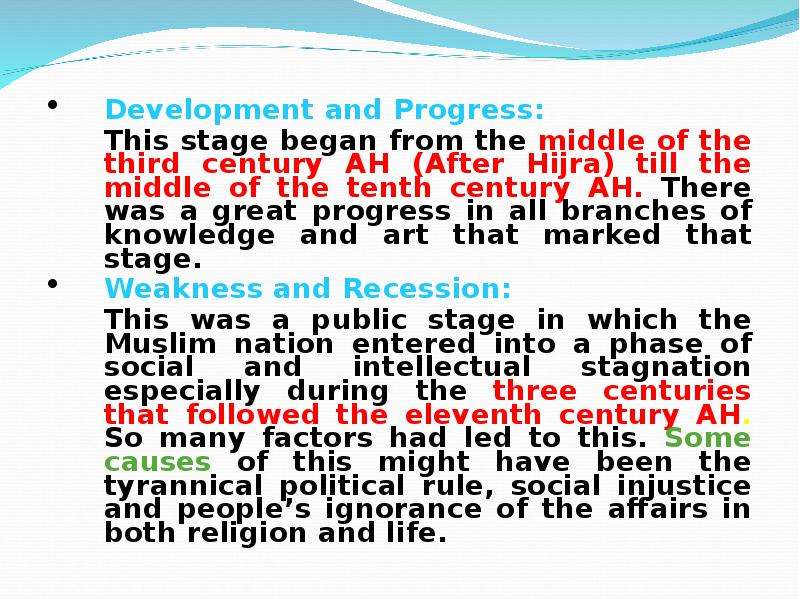 Development and Progress: Development and Progress: This stage began from the middle of the third century AH (After Hijra) till the middle of the tenth century AH. There was a great progress in all branches of knowledge and art that marked that stage. Weakness and Recession: This was a public stage in which the Muslim nation entered into a phase of social and intellectual stagnation especially during the three centuries that followed the eleventh century AH. So many factors had led to this. Some causes of this might have been the tyrannical political rule, social injustice and people’s ignorance of the affairs in both religion and life.
Pic.10 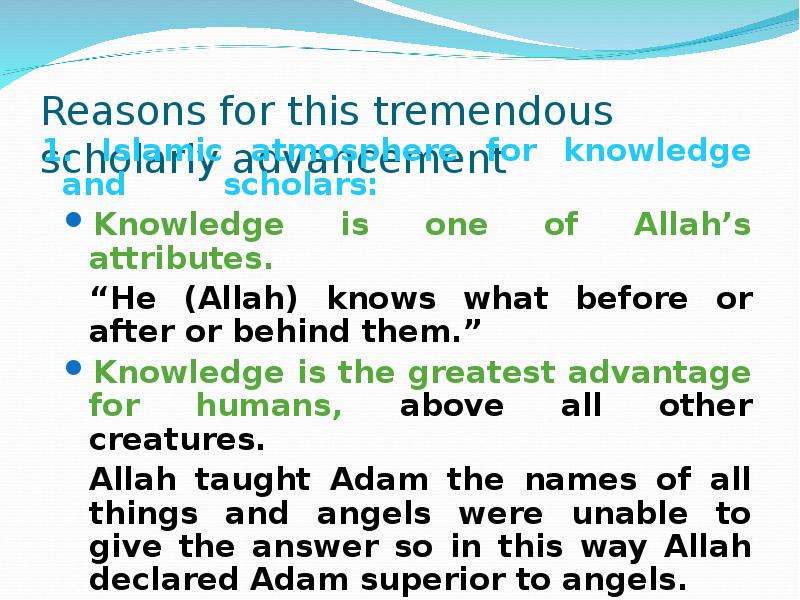 Reasons for this tremendous scholarly advancement 1. Islamic atmosphere for knowledge and scholars: Knowledge is one of Allah’s attributes. “He (Allah) knows what before or after or behind them. ” Knowledge is the greatest advantage for humans, above all other creatures. Allah taught Adam the names of all things and angels were unable to give the answer so in this way Allah declared Adam superior to angels.
Pic.11 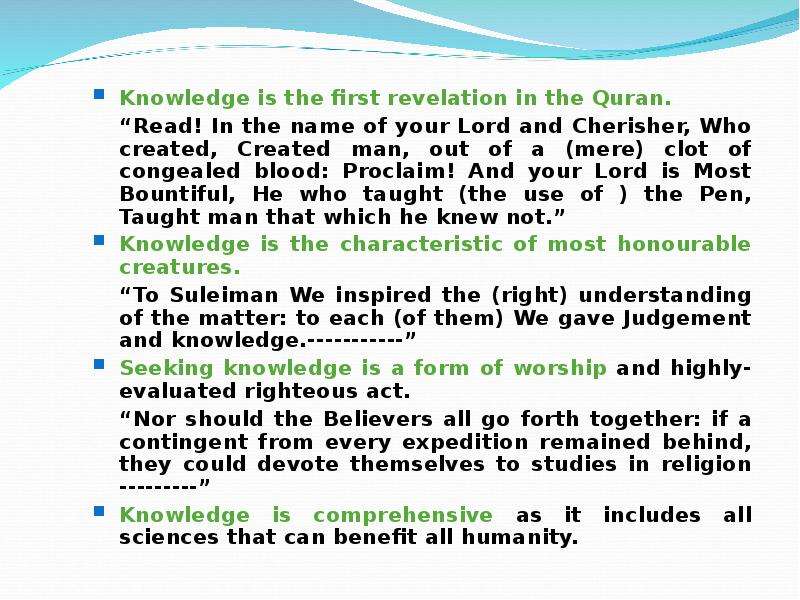 Knowledge is the first revelation in the Quran. Knowledge is the first revelation in the Quran. “Read! In the name of your Lord and Cherisher, Who created, Created man, out of a (mere) clot of congealed blood: Proclaim! And your Lord is Most Bountiful, He who taught (the use of ) the Pen, Taught man that which he knew not. ” Knowledge is the characteristic of most honourable creatures. “To Suleiman We inspired the (right) understanding of the matter: to each (of them) We gave Judgement and knowledge. -----------” Seeking knowledge is a form of worship and highly-evaluated righteous act. “Nor should the Believers all go forth together: if a contingent from every expedition remained behind, they could devote themselves to studies in religion ---------” Knowledge is comprehensive as it includes all sciences that can benefit all humanity.
Pic.12 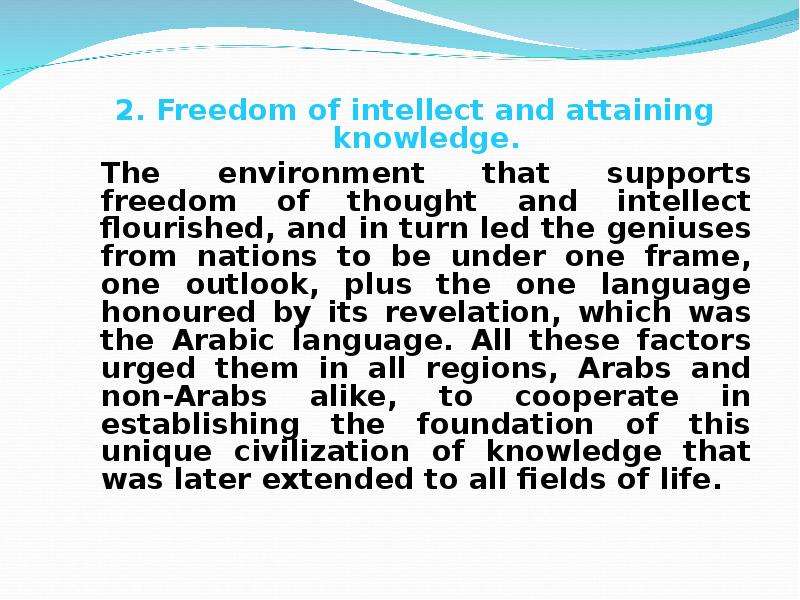 2. Freedom of intellect and attaining knowledge. 2. Freedom of intellect and attaining knowledge. The environment that supports freedom of thought and intellect flourished, and in turn led the geniuses from nations to be under one frame, one outlook, plus the one language honoured by its revelation, which was the Arabic language. All these factors urged them in all regions, Arabs and non-Arabs alike, to cooperate in establishing the foundation of this unique civilization of knowledge that was later extended to all fields of life.
Pic.13 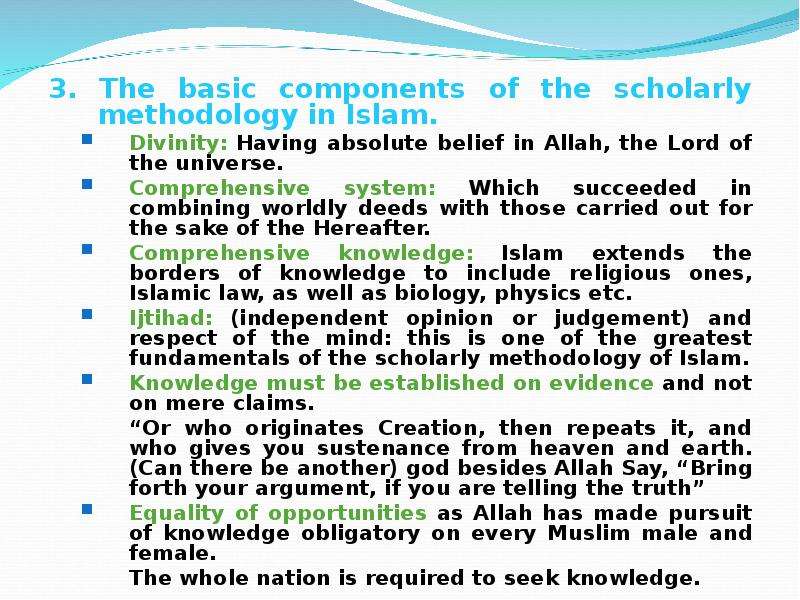 3. The basic components of the scholarly methodology in Islam. 3. The basic components of the scholarly methodology in Islam. Divinity: Having absolute belief in Allah, the Lord of the universe. Comprehensive system: Which succeeded in combining worldly deeds with those carried out for the sake of the Hereafter. Comprehensive knowledge: Islam extends the borders of knowledge to include religious ones, Islamic law, as well as biology, physics etc. Ijtihad: (independent opinion or judgement) and respect of the mind: this is one of the greatest fundamentals of the scholarly methodology of Islam. Knowledge must be established on evidence and not on mere claims. “Or who originates Creation, then repeats it, and who gives you sustenance from heaven and earth. (Can there be another) god besides Allah Say, “Bring forth your argument, if you are telling the truth” Equality of opportunities as Allah has made pursuit of knowledge obligatory on every Muslim male and female. The whole nation is required to seek knowledge.
Pic.14 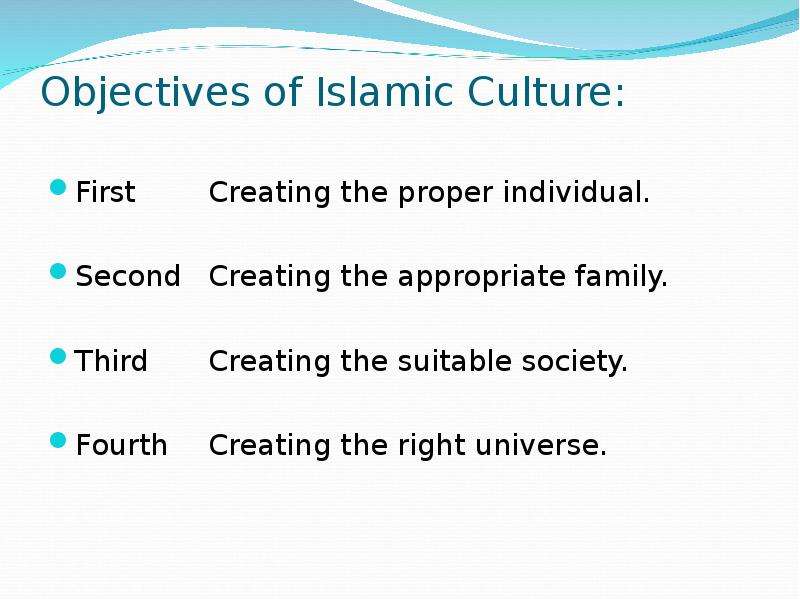 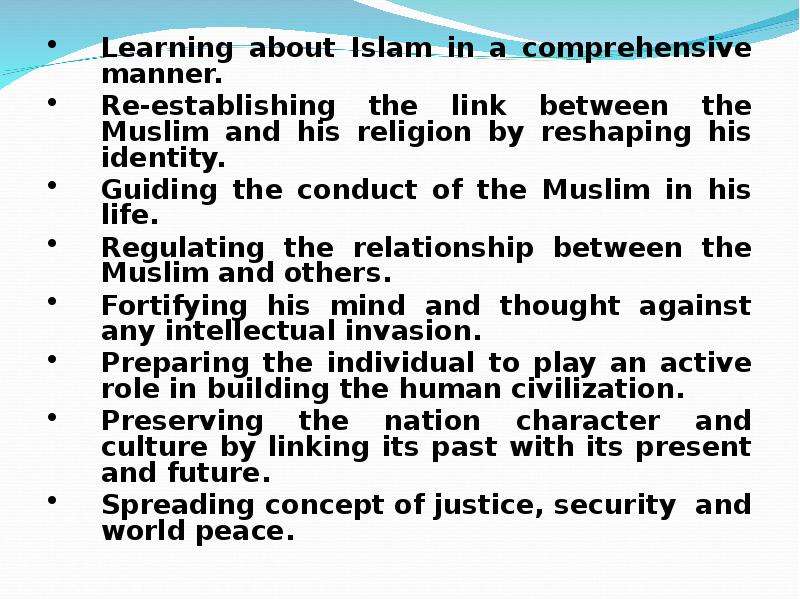 By studying Islamic Culture, the learner can achieve: Learning about Islam in a comprehensive manner. Re-establishing the link between the Muslim and his religion by reshaping his identity. Guiding the conduct of the Muslim in his life. Regulating the relationship between the Muslim and others. Fortifying his mind and thought against any intellectual invasion. Preparing the individual to play an active role in building the human civilization. Preserving the nation character and culture by linking its past with its present and future. Spreading concept of justice, security and world peace.
Pic.16 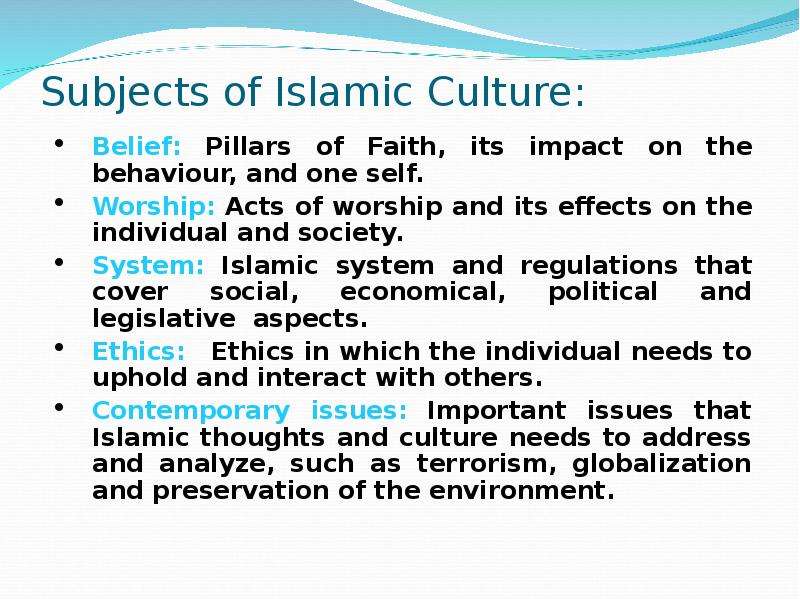 Subjects of Islamic Culture: Belief: Pillars of Faith, its impact on the behaviour, and one self. Worship: Acts of worship and its effects on the individual and society. System: Islamic system and regulations that cover social, economical, political and legislative aspects. Ethics: Ethics in which the individual needs to uphold and interact with others. Contemporary issues: Important issues that Islamic thoughts and culture needs to address and analyze, such as terrorism, globalization and preservation of the environment.
Pic.17 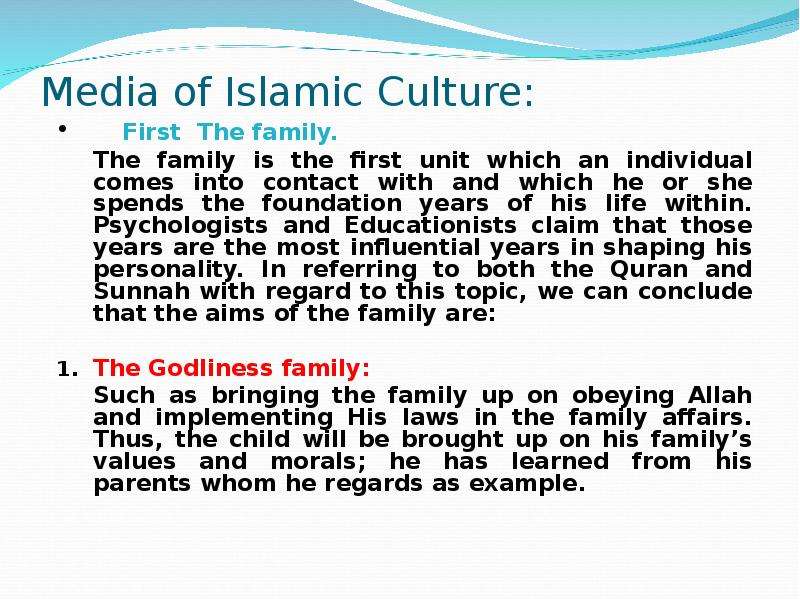 Media of Islamic Culture: First The family. The family is the first unit which an individual comes into contact with and which he or she spends the foundation years of his life within. Psychologists and Educationists claim that those years are the most influential years in shaping his personality. In referring to both the Quran and Sunnah with regard to this topic, we can conclude that the aims of the family are: The Godliness family: Such as bringing the family up on obeying Allah and implementing His laws in the family affairs. Thus, the child will be brought up on his family’s values and morals; he has learned from his parents whom he regards as example.
Pic.18 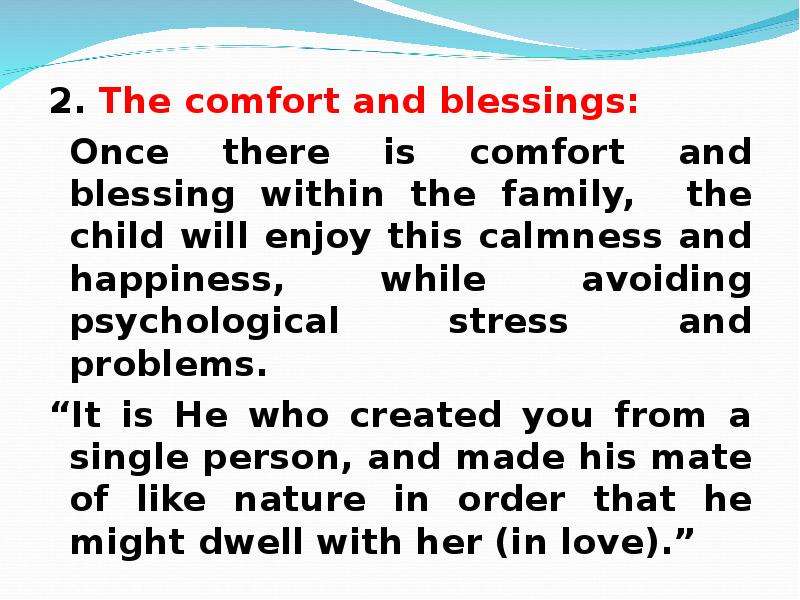 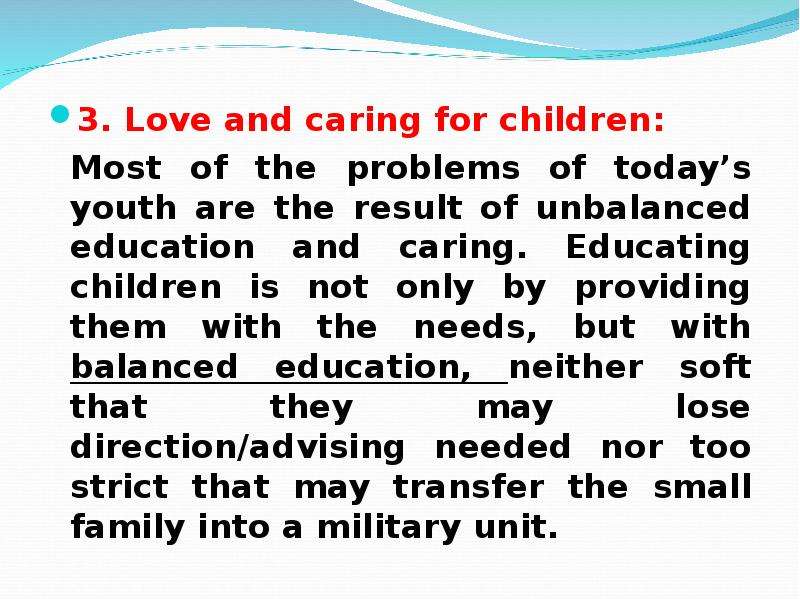 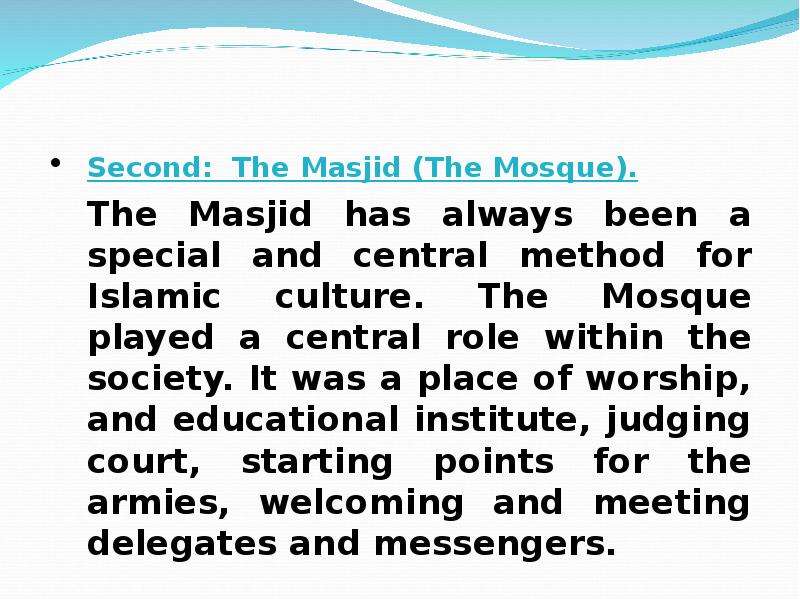 Second: The Masjid (The Mosque). The Masjid has always been a special and central method for Islamic culture. The Mosque played a central role within the society. It was a place of worship, and educational institute, judging court, starting points for the armies, welcoming and meeting delegates and messengers.
Pic.21 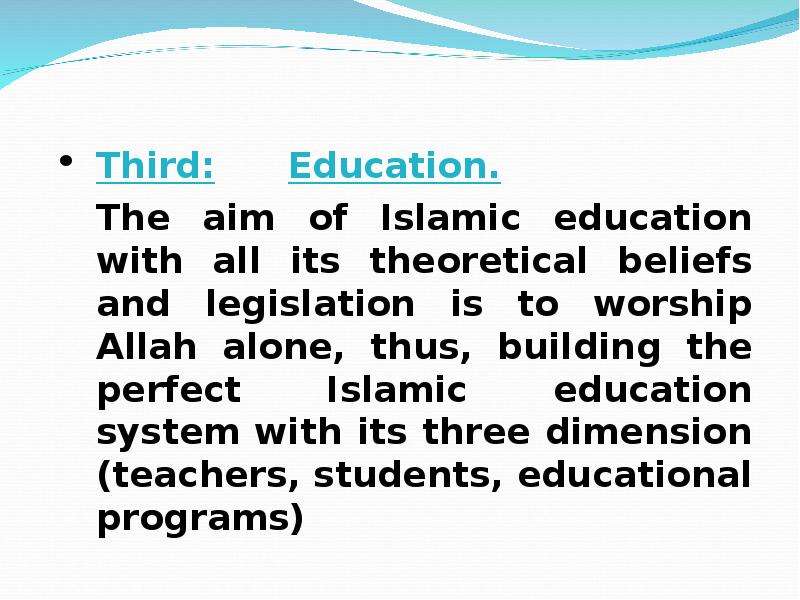 Third: Education. The aim of Islamic education with all its theoretical beliefs and legislation is to worship Allah alone, thus, building the perfect Islamic education system with its three dimension (teachers, students, educational programs)
Pic.22 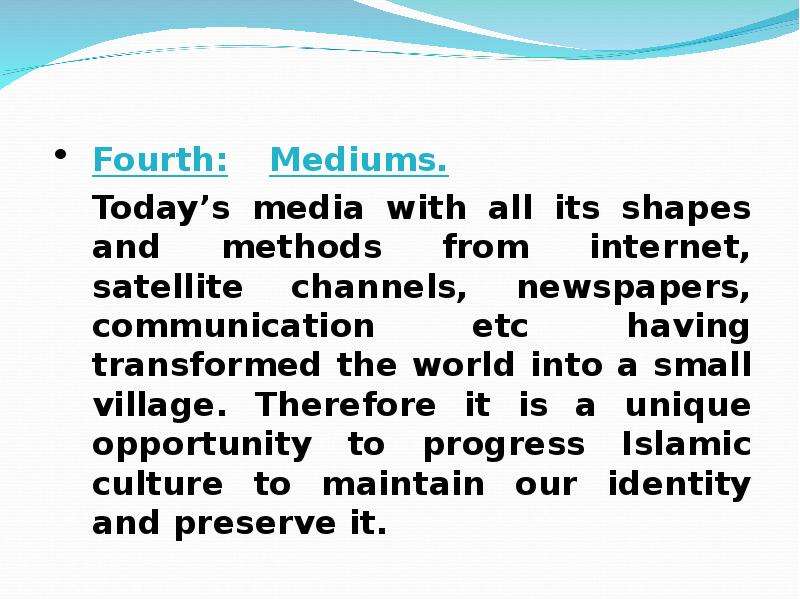 Fourth: Mediums. Today’s media with all its shapes and methods from internet, satellite channels, newspapers, communication etc having transformed the world into a small village. Therefore it is a unique opportunity to progress Islamic culture to maintain our identity and preserve it.
Pic.23 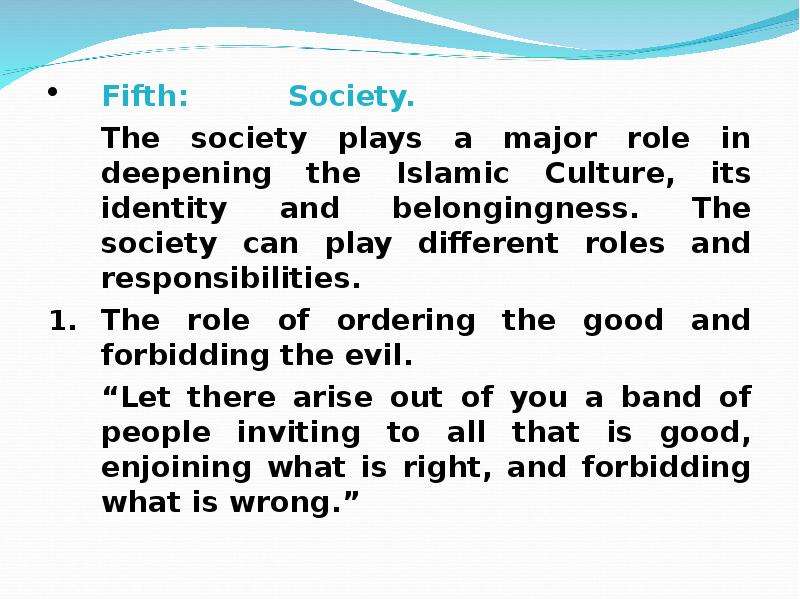 Fifth: Society. Fifth: Society. The society plays a major role in deepening the Islamic Culture, its identity and belongingness. The society can play different roles and responsibilities. The role of ordering the good and forbidding the evil. “Let there arise out of you a band of people inviting to all that is good, enjoining what is right, and forbidding what is wrong. ”
Pic.24 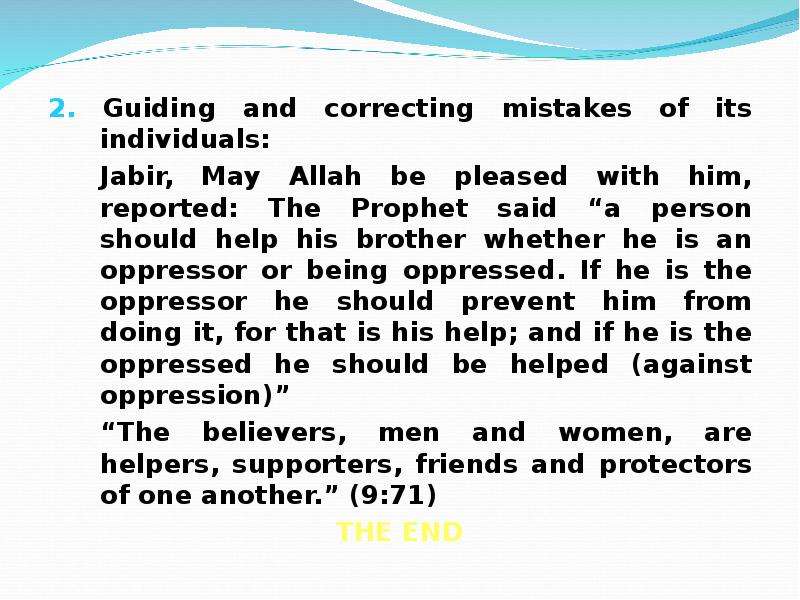 2. Guiding and correcting mistakes of its individuals: 2. Guiding and correcting mistakes of its individuals: Jabir, May Allah be pleased with him, reported: The Prophet said “a person should help his brother whether he is an oppressor or being oppressed. If he is the oppressor he should prevent him from doing it, for that is his help; and if he is the oppressed he should be helped (against oppression)” “The believers, men and women, are helpers, supporters, friends and protectors of one another. ” (9:71) THE END